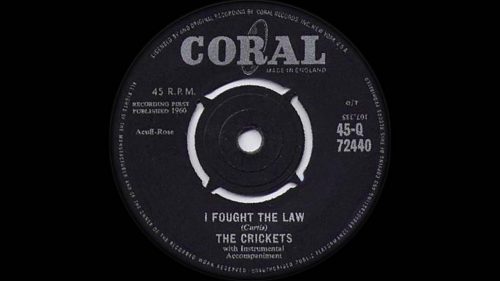 Sixty-one years ago today, on December 4, 1960, Coral Records released In Style with the Crickets. This was the band’s first album since the passing of leader Buddy Holly. It had taken a long time to see the light of day; the Crickets recorded it in 1959, before guitarist Sonny Curtis was drafted. Only a couple months after its release, vocalist Earl Sinks quit. So it didn’t really have luck on its side.

What it did have was a batch of great songs, including “More Than I Can Say,” which Leo Sayer took into the top five two decades later. It also featured “I Fought the Law.” Curtis wrote the song and played its memorable lead guitar. It was peppy, on the polite side, and didn’t gain an awful lot of notice.

Unless you were Bobby Fuller.

The Bobby Fuller Four covered three songs from In Style with the Crickets, even going top-30 with “Love’s Made a Fool of You.” But it was “I Fought the Law” that landed them immortality. Fuller stuck pretty close to the original, toning down the Hollyisms and changing “zip gun” to “six gun,” with accompanying illustrative drums. (A recording from two years prior used “shotgun.”)

Fuller didn’t get much time to enjoy his success, dying under mysterious circumstances mere months after “I Fought the Law” made the top ten. Sonny Curtis enjoyed other successes, writing the Everly Brothers’ smash “Walk Right Back” and the theme for The Mary Tyler Moore Show. That show aired its final episode on March 19, 1977 – about three weeks before the Clash released their first album, and a year and a half before Strummer and Jones made the discovery that got them their first toehold in America.

2 Responses to “That’s a Cover?: “I Fought the Law” (Bobby Fuller Four / The Crickets)”