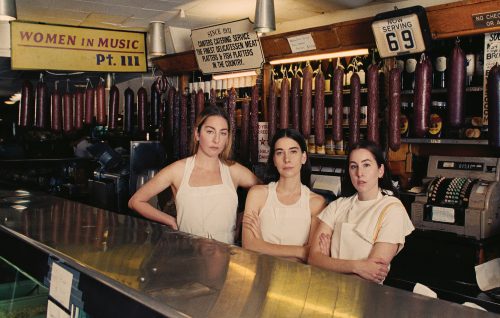 The individual members/sisters of HAIM are in the midst of a busy December on many fronts. Este, in her first outing as a screen composer, created the powerful score for Maid, the recent Netflix breakout hit series. Meanwhile, Alana is having a star turn of her own: she’s the breakout lead in Paul Thomas Anderson’s new film Licorice Pizza.

Still, even amid of all of these solo adventures, the sisters Haim — including Danielle, the group’s lead singer and de facto frontperson — took to social media for each of the eight days of Hanukkah, engaging together in some holiday festivities and sisterly follies. In the midst of their Eight Crazy Nights, HAIM dropped a rebooted version of Adam Sandler’s “The Hanukkah Song,” replete with a variety of 2021 references. Follow the bouncing ball for all of them, there’s the Brothers Dessner, Japanese Breakfast, the late Stephen Sondheim, Doja Cat, Timothée Chalamet, the Omicron(ukkah) variant. Even HAIM’s favored LA deli haunt, Canter’s, which featured on the cover of the group’s latest full-length, Women In Music, Pt. III, makes an appearance. The whole thing is pretty loose, but worth a watch.