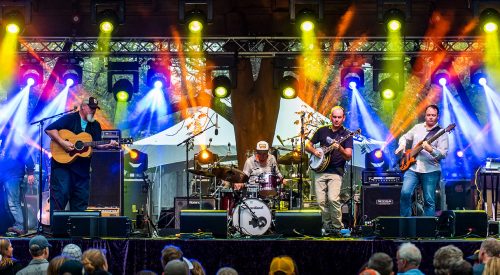 The Velvet Underground famously experienced minimal commercially success in their lifetime, but many of their songs have slowly found their way into the popular consciousness. One of those is “Rock & Roll” from Loaded, their last album with primary songwriter Lou Reed (the last proper Velvets album period, as far as most fans are concerned).

Acoustic Syndicate are a bluegrass band from the Blue Ridge Mountains in North Carolina. They’ve been together for nearly 30 years and have put out seven albums including a live album. The opening of their new “Rock & Roll” cover really sounds far from the Velvets’ original with just a solitary guitar, soon joined by a banjo. But when lead singer Bryon McMurry starts singing, the song is unmistakably “Rock & Roll,” with McMurry’s cadence not that far off from Reed’s speak-singing. McMurry plays with the lyrics a bit, which has become de rigeur for covers of this song.

Though the instrumentation is nearly entirely acoustic as you would expect from a bluegrass band, they play a variation of the song’s famous guitar hook on a distorted guitar. Rest assured, though, that there is a bluegrass break about three minutes in, with a pretty great banjo solo. Though it’s fairly faithful, those new touches that make this a fun, fresh take on the song.