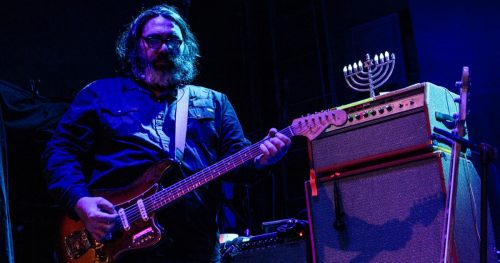 Indie rock greats Yo La Tengo recently wrapped up their eight-night Hanukkah run of live shows — a tradition that’s lasted multiple decades — at New York City’s Bowery Ballroom. Whether you’re a new or longtime acolyte of the trio, Yo La Tengo’s Hanukkah shows are an ideal entry point into the group’s ouevre. From even just one of the eight nights, which each have a unique setlist and special guest openers, you can grab a pretty good sense of Ira Kaplan, Georgia Hubley and James McNew’s creative spectrum, not to mention the vast web of influences and collaborators, old and new, that fuel them. Still, the band’s Hanukkah sets are most exciting to consider as one epic and comprehensive experience — some kind of combo between endurance exercise and heady jigsaw puzzle.

On the covers front, this year’s run of Yo La Tengo Hanukkah shows featured an especially varied array of picks — sixty in total, ranging from The Beatles and KISS to Flo & Eddie and Randy Newman. Many of the covers featured Yo La Tengo’s surprise opening acts as special guests, playing alongside the band.

Below are just a handful of cover-related highlights from YLT’s run. For the complete archive of the band’s 2021 Hanukkah setlists, special guests and details on all sixty cover selections, we recommend taking a deep dive via Jesse Jarnow’s Frank & Earthy blog.

Night #3 (Nov. 30) featured the atmospheric guitar stylings of William Tyler and Marisa Anderson, who collaborated in an opening set of their own. Later in the show, Tyler and Anderson joined Yo La Tengo for a jangly cover of Bob Dylan’s “Love Minus Zero/No Limit,” featuring YLT bassist James McNew in a turn on lead vocals.

Later in the same set, Tyler, Anderson and Yo La Tengo played a ripping version of Jonathan Richman’s “She Cracked”:

Night #5 (Dec. 2) saw Low and comedian Fred Armisen guesting at various points of the set, with an encore that featured both acts alongside Yo La Tengo. Covers included picks by Neil Diamond and Flo & Eddie, but the highlight was a version of The Clash’s “(White Man) in Hammersmith Palais,” with Armisen on guitar and lead vocals.

Night #7 had its own stellar lineup early on, with comedian Hari Kondabalu and instrumental combo Natural Information Society opening the night. But most of the covers were confined to the show’s encore, where Jon Langford and Sally Timms of the Mekons deployed YLT’s help in “covering” a few of their own tunes. They also featured a cover of The Ramones’ “I Don’t Care”:

Night #8, which featured opening act Eleventh Dream Day and comedian Joe Pera, concluded with a surprise appearance from Ira Kaplan’s mother on lead vocals. She and the band closed the holiday run with charmingly pared-back versions of Cat Stevens’ “Here Comes My Baby” and, as has been the case in previous Hanukkah runs, Anita Bryant‘s “My Little Corner of the World.”