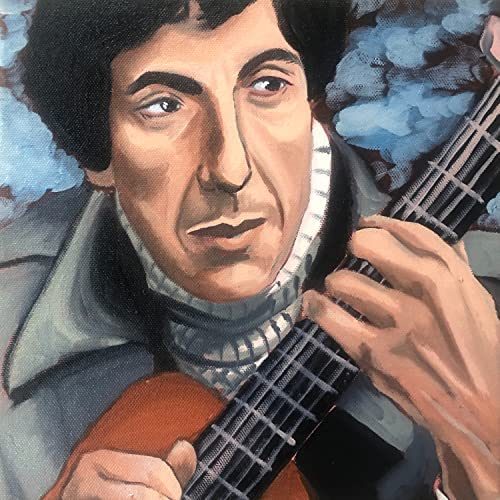 Drawing comparisons between this new album and the hugely influential I’m Your Fan is probably unfair: after all, the earlier record saved ‘Hallelujah’ from remaining an undiscovered gem in Leonard’s catalogue, and rescued his career by introducing his music to a new audience of young rock fans. Cult Classics arrives in a very different context (Cohen is now revered to the point of having a 10,000-foot mural in his honour on the side of a Montreal high-rise), and is more of an acknowledgement of the influence Leonard continues to have on the young singer-songwriters of today.

The album kicks off with Elijah Mann’s take on “Bird on a Wire,” which is elevated by some wonderful saxophone that weaves gracefully around Mann’s electric guitar. There’s a slight New Orleans funeral march feel that creeps into this track, and the somber atmosphere carries over into Paola Bennett’s moody interpretation of “Dance Me to the End of Love.” Just in case the album was in danger of getting a little too downbeat so early on, the electric guitar intro of “Is This What You Wanted?” – by punk outfit The Defectives – ups the tempo and slices through the mix like a hot knife through butter.

After, this, however, thing s slow down again for a while. Jordan Popky’s “Famous Blue Raincoat,” Ann Marie Nacchio’s “Treaty,” and Lana Cencic’s “Hey That’s No Way to Say Goodbye” are all good covers, but being placed so closely to each other on the album means that the arrangements begin to blend into each other – these might be best experienced mixed into a playlist rather than one after the other. Shay Moulder’s “I’m Your Man,” however, is a magical creation, with a bass drum, trumpet and accordion painting an evocative backdrop to the ukulele and vocal.

Two tracks later, we get a superb duet between Emanuel Ayvas and Giselle on “The Smokey Life.” The title of this track is appropriate, because the atmosphere conjured by the two of them really does feel like a smoky bar just before closing time. It also captures the sense of intimacy that was such a huge part of Cohen’s work, bringing to mind Leonard’s great duets with collaborators like Jennifer Warnes and Sharon Robinson.

Giselle reappears on track 9 for a solo “Take this Longing.” It’s a strong performance, but the impact is lessened slightly by its proximity to Ellajay’s “Who by Fire,” which is quite similar. These are two quality tracks that would benefit from being further away from each other. After that, we get a real surprise: a performance of “Chelsea Hotel #2” by Adam Tilzer (also the producer of the album), who sounds so much like a young Leonard Cohen that, if you didn’t know better, you’d swear it was a young Leonard Cohen. It’s uncanny, but somehow doesn’t come across as an imitation – the effect is quite charming, like an unexpected reunion with an old friend.

The hot streak continues with Kiirstin Marilyn’s whispered, conspiratorial “Everybody Knows” – an excellent arrangement that builds to a great organ/electric guitar crescendo – and Jacob Jolliff’s frantic, paranoia-soaked take on “The Partisan,” which features a mandolin solo in the style of Leonard’s old bandmate Javier Mas. Yifi Zhang closes the album with an impressive piano-and strings version of “Thanks for the Dance,” the title song from Leonard’s final, posthumous album.

Cult Classics Vol. 1: I Don’t Think of You That Often is a subdued and respectful tribute to Leonard Cohen. Perhaps too respectful: if anything is missing, it’s a drastic reinvention in the manner of Nick Cave’s “Tower of Song” from I’m Your Fan, or Bono’s inventive version of “Hallelujah” from Tower of Song. Another potential issue is that, where those albums varied the sonic palette substantially from one song to the next, Cult Classics Vol 1 is very much a mood piece. How much you enjoy it will probably depend on whether you prefer your tribute albums cohesive or a little all over the place.

Nevertheless, this album has clearly been crafted with care and love for the material, Leonard Cohen would surely be delighted that his songs continue to inspire reinterpretation in the years after his death. The question now is: who will be the subject of Cult Classics Vol. 2?

And don’t forget to check out the 33 1/3 book about I’m Your Fan by Cover Me founder Ray Padgett.

One Response to “Review: ‘Cult Classics Vol. 1: I Don’t Even Think of You That Often’ (Leonard Cohen Tribute)”