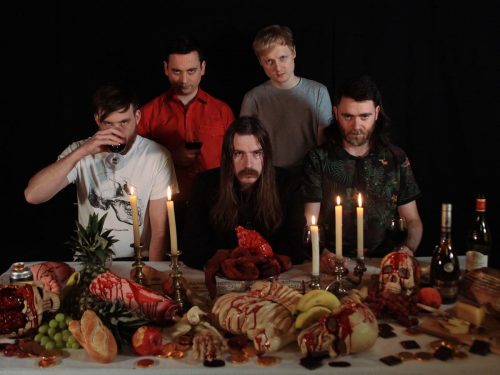 UK psych rockers Pigs Pigs Pigs Pigs Pigs Pigs Pigs are not the first band you would think of to cover an iconic disco hit like Donna Summer’s “Hot Stuff.” The song opens with super slow doom metal guitars before it breaks out. Gone is that instantly identifiable synth hook, replaced instead by super sludgy distorted guitars. Lead singer Matthew Baty shouts the lyrics like he’s in a proto punk band. On the chorus he’s replaced by Holly Ross of the Lovely Eggs, also shouting, with her voice slightly distorted.

Then the band slows to a crawl and Baty and Ross shout over a riff that almost sounds like sludge “Wild Thing.” And there’s a definite garage rock vibe to the whole thing, albeit far sludgier than anything you’d label garage rock. If you didn’t think it was possible for disco to become sludge metal, check out the evidence below. The cover was recorded in support of a prominent Newcastle record store. Enjoy!