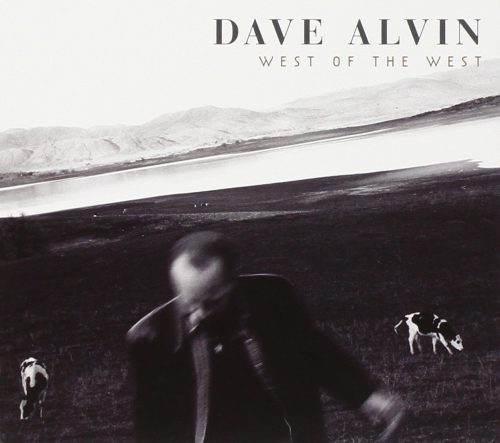 “We dreamed of all the crazy places we never been. Like California.” So sings/speaks Bill Kirchen in the classic Commander Cody song “Mama Hated Diesels,” aptly summing up the lure of the Golden State. And, with due hats tipped to Tennessee and to New York State, is there any other that has drawn in so many songwriter acolytes to the flame it has provided, and for so long? Which, by way of introduction, is where Dave Alvin headed with West of the West, a glorious potpourri of songs from the 5th largest economy in the world, pulled together, chosen and sung by the erstwhile Blaster and X man.

Dave Alvin has had a long career, one that’s far from over. As mentioned, he started off, alongside bro’ Phil, in a seven-year stint in the Blasters, a down and dirty blues-rock band from East L.A. who could add rockabilly country flavors to the pot and serve up a funky, punky succotash. Frictions, largely between he and his brother Phil, led to his leaving the band, and becoming, for a while, the guitarist in X, the prime progenitors of new wave Angeleno snarl.

Embarking, in 1987, on a solo career, he took a while to find a presence, if picking up some good reviews along the way. Second album Blue Boulevard had him occupying a would-be Springsteen blue collar balladeer mode, but it wasn’t until the unplugged King of America that he fully found his voice, it becoming a deeper and richer instrument that has a reassuringly warm resonance that is the aural equivalent of a sturdy sheepskin coat.

Increasingly, as Alvin delved into the history of old American traditional song, his own songs were taking on an old time feel themselves. After several records in this vein came 2006’s Way of the West, an album of covers, each from artists most closely allied to the state of California. So we get, obviously, Brian Wilson, alongside a varied crew that includes Tom Waits, Jerry Garcia, John Fogerty, and Jackson Browne, together with lesser known writers like Kate Wolf and Kevin “Blackie” Farrell. Plus, in honor of just another band from East L.A., the venerable Los Lobos have the rare treat of being covered, rather than providing the covering. I snapped up my copy as much for the songs chosen as the singer, astonished at how far he had moved on from his Blue Boulevard days.

A gloriously dreamy “California Bloodlines,” John Stewart’s undersung ode to the state, opens proceedings, Alvin’s croon barely above a whisper. With Greg Leisz on production duties, this is as sweet a brew as you can imagine, the organ of Joe Terry a warming glow in the center. This clicks then into the sharp walking blues, L.A. style, of Jackson Browne’s “Redneck Friend,” which is, if nothing else, an easy listen, if a little lightweight. “Kern River” is altogether sturdier fare, Leisz adding some elegant steel, and later, mandolin, to this ballad of the old west, from the pen of Merle Haggard. Alvin’s vocal is almost lugubriously longing.

Alvin evokes a slightly sleazier blues feel, appropriately enough, for Tom Waits’ “Blind Love.” He plays it as a 12-bar slow burner, almost unrecognizable from the studied ramshackle chaos of the original. The elegant guitar solo is, again, Leisz. Alvin then tackles the wistful whimsy of “Here in California,” with Christy McWilson, later one of Alvin’s Guilty Women, on hand to trade verses. Alvin was an early champion of Kate Wolf, only now getting the fuller appreciation her lifetime failed to offer. This song is a little atypical of Wolf’s canon, but it is an elegant song and it is good to see it here.

Less welcome is a curious reworking of R&B doo-wop warbler Richard Berry’s “I Am Bewildered.” As in, me too, with Alvin’s dark brown vocal far too structured for this song, the arrangement little altered and thus highlighting the contrast with Berry’s wide-eyed delivery. The vintage L.A. vocal group the Calvanes try to add time appropriate substance, losing the battle.

Dave Alvin – Down on the Riverbed (Los Lobos cover)

I wonder if most folk know “Sonora Death Row” from the playing of Robert Earl Keen, who has a slightly more nuanced version of this Black Farrell song. This is a decent enough version, the banjo, Danny Barnes, particularly affecting, but the vocal is a bit straitlaced somehow. Barnes stays on board for the Los Lobos cut “Down on the Riverbed.” Here, Alvin finds just the right voice for his old running mates tale of derring-do, stripping it back a little from the swampy feel in the original iteration.

Speaking of original iterations, the not dissimilarly voiced Tom Russell has a very similar style and arrangement added to his “Between the Cracks.” But this is a slight cheat as, although first performed by Russell, it was actually a co-write with Alvin, who even produced that version. But, as someone who finds Russell’s voice too mannered, even if Alvin’s is only slightly less here, that makes this one another win.

If CCR epitomize steamy bayou choogles, Alvin bravely deconstructs “Don’t Look Now” into near a jump blues. There’s some exemplary harp blowing from Jack Rudy, as Joe Terry skitters around, this time on piano. This contrasts neatly with a decidedly gospel feel for “Tramps and Hawkers,” nominally written, in 1978, by a Jim Ringer. Actually derived from a song from the Scottish tradition, this is a pleasing diversion from perhaps more rousing adaptations. More trad. arr. follows, except it isn’t, Alvin now stretching the ancient sounding bones of the solo Jerry Garcia song into a passable facsimile of Fairport Convention. “Loser” is the song, one the Dead would later absorb into their repertoire, and it is terrific. Some neat guitar interplay too, Leisz again, with Chris Miller.

To end comes perhaps the highlight of this largely very commendable selection. Many covers of the Beach Boys try to either mimic or morph the template, whereas Alvin treats “Surfer Girl” with nothing but a simple respect. He gives it his best croon, forsaking any need–well, hardly any–to fanny around with vocal chorales. (The Calvanes are again on hand, if restrainedly.) It is simple, a delight of picked guitar and lots of echo, his voice resonantly sincere. A triumph.

These days Alvin is perhaps more of an elder statesman figure, revered more for his own material. But for a writer to acknowledge his peers this lovingly and this astutely, speaks volumes of the man. West of the West is a piece of work that still stands up well in 2021. I have seen the album labeled Volume One in some areas, notably venerable Americana resource No Depression. When, then, should we expect Volume Two?

West of the West Tracklisting:

One Response to “Cover Classics: Dave Alvin’s ‘West of the West’”