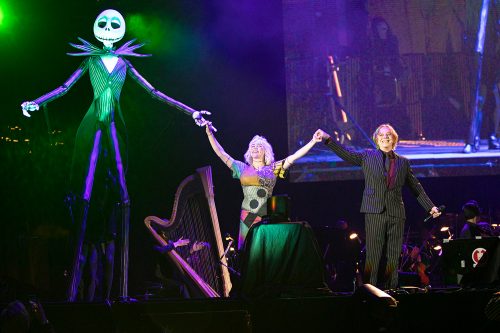 It’s up for grabs whether The Nightmare Before Christmas counts as a Halloween Movie or a Christmas Movie. The stop-motion animation classic, produced by Tim Burton, is often lumped in with seasonally spooky fare, but the film’s plot hinges around Jack Skellington’s infatuation with Christmas Town. Personally, I usually wait until at least November 1st, the phase change between the holiday seasons, for my annual revisit to the film. Danny Elfman’s gloriously macabre soundtrack makes for an ideal November appetizer to the oncoming blitz of holiday music to come: the songs have their share of jingle bells, but also choruses of demon children and grim grinning ghosts.

In the wake of Halloween, we’ve got a pair of covers of one of Nightmare Before Christmas’s ballads, “Sally’s Song.” The simple number has been covered in the past by Fiona Apple and Amy Lee of Evanescence, but here it finds a shared resonance among two disparate artists: indie blues-rockers Larkin Poe, and Billie Eilish.

Billie Eilish’s take comes from a live-to-film concert of The Nightmare Before Christmas that took place over Halloween weekend at Banc of California Stadium in Los Angeles. Alongside a symphony orchestra (and a massive audio-animatronic puppet of Jack Skellington), Eilish plays the role of Sally, offering a relatively straight read of the song — leaning into its smallest and most delicate turns, almost in spite the spectacle.

Larkin Poe’s version is fully instrumental, trading the wispy vocal lead for slide guitar. The pair are in a home studio — far from the stadium stage — but like Eilish, they opt to keep the song near its original figurine-miniature scale.

Eilish’s Nightmare Before Christmas appearance this weekend also featured a voice cast that included Danny Elfman himself, Paul Reubens, “Weird Al” Yankovic and Ken Page (the original Oogie Boogie from the 1993 film), all bringing the film’s original songs to life. Check out Elfman and Eilish’s finale cover of the film’s “Simply Meant To Be” (just a few airy stanzas) below.