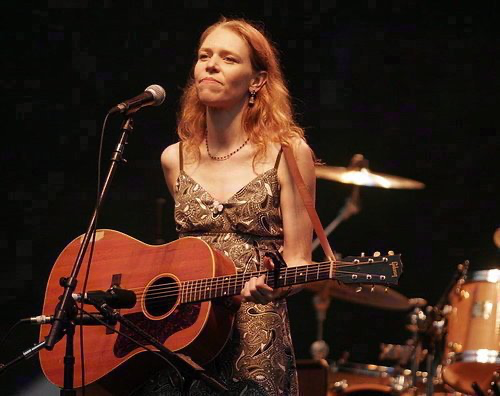 Happy Birthday to Gillian Welch! She deserves an extra slice of cake this year, her 54th, because the past twelve months have been so surprisingly busy.

For one thing, she won a Grammy in the Best Folk Album category this year, for her all-covers collection All the Good Times, made with her ever-present partner David Rawlings. (We reviewed the album here.) The couple also collaborated with Barry Gibb, the Bee Gee with a taste for the kind of Americana and country music that Welch and Rawlings have helped to popularize. But most importantly, the duo spent the year releasing the 48-song, three volume Lost Songs project, rare bits of good news in those hard and uncertain times.

The lost songs were almost lost when a tornado tore into the couple’s Nashville recording studio. The 48 songs were remnants of Welch’s efforts to complete a songwriting contract she’d committed to long before she achieved success as a performer. She wrote this batch of songs two decades ago, between the release of her albums Soul Journey and Time (the Revelator). And then she forgot about them. The tornado that very nearly ruined some of their most precious material possessions bought the old demos and tapes to light, and prompted the couple to reassess their career. The songs are sometimes fragmentary, but this is part of the charm of the collection. The parallel with Dylan’s Basement Tapes is one that Welch and Rawlings are very much aware of.

They seem to have had Dylan in mind from the beginning. About the material released on Time (The Revelator) Welch said “As opposed to being little tiny folk songs or traditional songs, they’re really tiny rock songs. They’re just performed in this acoustic setting. In our heads we went electric without changing instruments.” Indeed they covered Dylan not once but twice on All the Good Times. (“Don’t Think Twice, It’s All Right” was not included, in case you were wondering.)

If you are new to this music, a great place to start is with–well, basically any of the albums released under the name “Gillian Welch.” Each one is a trove of great songs and each is a coherent piece that hangs together as a unit. (Some artists are good to hear in random shuffle mode; with Gillian Welch you lose something important–it’s that whole trees vs forest thing.)

Her recorded output goes back to 1996, but the couple takes their time in releasing things, and it’s not like there are a bin full of albums to choose from. Die-hard fans have sated their thirst for more of this stuff with the many side projects led by Welch’s guitarist, producer, and life-partner David Rawlings. While he’s the frontman on these, Gillian is in the mix instrumentally and vocally. (The moniker for one such side project is The Dave Rawlings Machine.)

Even though it’s not his birthday, it must be said of Rawlings that he happens to be one of the premier guitarists of his generation. It’s astonishing to think that Welch felt a lot of pressure to drop Rawlings from the act when she was first getting attention from the music biz. It may be part of the reason why the two-member outfit bills itself as “Gillian Welch.” But it’s more astonishing that it took time for Welch herself to grasp that she didn’t have to write songs for other people to perform. Time is indeed the revelator.

The Pretty Things have been a thing longer than Gillian Welch as been alive. Respect for any band with a 55-year lifespan! The Pretty Things were one of the first of the British blues bands, but in time they morphed into psychedelia, segued into glam rock, reincarnated as a new wave outfit, and then  became a blues ensemble again. Somewhere in there they wrote the first rock opera. The band has had more members come and go than a 78 rpm record has grooves. As instigators of chaos and instability, they are the polar opposite of Gillian Welch, who is nothing if not consistent.

The Pretty Things’ cover of “The Devil Had a Hold on Me” came at the very end of their lengthy run. In fact the song was released after the band’s founder and frontman Phil Mays died unexpectedly in May, 2020. Mays was in his mid-70s when he sang this song; the recording brings to mind the songs Johnny Cash made late in life with Rick Rubin. If you felt the pathos of the Cash project you’ll feel it here too. You hear the limitations that aging and other bad habits will impose on a singer’s voice, but you also hear Mays’ strength of spirit and character. The song is haunting to begin with—Welch does Southern Gothic better than anyone—but the effect is deepened when you know this cover came out posthumously. It appears on on the band’s Bare as Bone, Bright as Blood release from 2020, their first and apparently last all-acoustic offering.

Delicate and dreamy, wistful and sentimental, “Dear Someone” is an outlier in the Gillian Welch catalog. It feels like a classic from the Tin Pan Alley period. But Lila Downs and Norah Jones disrupt the song’s aura of repose and balance with a curious collage of styles and sound—a snippet of mariachi here, a splash of orchestral strings there, and a stringed harp solo to wash it down. They also allow a collision of vocal styles to occur as the two widely different singers trade verses (only to blend their voices on the refrain).

It was Jones who developed the obsession with Welch’s song and who instigated the collaboration with Downs, but you’ll find their recording on Downs’ 2019 release, Al Chile, where it stands out as the album’s only English-language track. It’s inspiring to see two bi-cultural international stars show some love for the over-looked “Dear Someone.” Downs likely brings the song to a broader range of listeners than Welch has had thus far.

Welch most often sings with quiet stoicism. Josienne Clarke on the other hand is a much more emotive vocalist, a less veiled one. She can sing with power and clarity, and her rendition offers a marked difference from the original without trying too hard to “own it.” It happens organically and beautifully. That her voice has traces of influences like Sandy Denny–Clarke is from the U.K. after all–is yet another dynamic to appreciate here.

Here Clarke is paired with the gifted guitarist Ben Walker. It’s a relief to hear the song in the hands of a player who is not steeped in the same sources as Rawlings. Walker may like roots music, but for him that would be the music of the British Isles in the 1700s.

The duo split up in 2019, after a decade of commercial and critical success, and an uneasy relationship to the “folk” category. Their careers continue on separately and are worth following.

Viewer/Listener discretion advised: Content contains yodeling. You are advised to get over it and get with it. Proto-punker and lounge lizard David Johansen did, and he’s an ex-New York Doll, cool AF. What’s your excuse?

Gillian Welch has written plenty of songs from a man’s perspective, and in a better world more male vocalists would step up to re-interpret them. The older and ornerier the singer, the better the cover when it comes to Gillian Welch’s darker material.

Johansen pours a lot of well-worn soul into this ode to an opioid. His gruff delivery makes the song’s narrator come to life in a way Gillian Welch herself could not (and didn’t need to). The highlight is the distinctive chorus, which consists of a vocal melody line that has no sensible words: it sets up the closing phrase, “My morphine be the death of me.” Welch yodels through most of the chorus, reaching some very high notes indeed. Johansen for his part hits that section in low gear but with bravado–it is at least yodel-adjacent if not an actual yodel. I imagine Welch was delighted to have a well-seasoned singer like Johansen take this song for a spin on the dance floor. It’s on his 2002 release Shaker.

The artist known as Bootstraps, Jordan Beckett, has an impressive track-record with covers. He also has a knack for landing those covers (of Tom Petty, Elliott Smith, Whitney Houston, and more) on many a television and film soundtrack.

When Beckett takes on one of Welch’s juiciest songs, “Revelator,” he’s at a seeming disadvantage in not having anyone to step into the David Rawlings role as harmony singer: a key ingredient to the song—its hook—is the way Rawlings voice wraps around Welch’s on the backend of each verse. But Beckett’s no imitator, and he adds plenty of his own unique flavoring to compensate, particularly in the rich production and engaging studio effects. His rendition is a nice clean break from the minimalism of Welch/Rawlings.

Gillian Welch’s sepia-toned voice invites a dark or cynical reading of her lyrics that the lyrics themselves may not support. A case in point is “One More Dollar,” where I take the narrator’s tale as a ruse, a sob story. At best, it’s a self-deception. He says he’s trying to get back to where he once belonged, but I don’t think he has any intention to buy a bus ticket home with the spare change he’s collecting. He’s already home, at home with having no fixed address. His bit of fiction is meant to keep the donations flowing and the game going.

But wait. That sepia-tone filter is removed when the Wailin’ Jennys perform the song. It appears that the lyrics have no shady subtext after all. The Jennys’ warm voices are pure and bright; their harmonies lift the spirit; the fiddle plays along sympathetically, as fiddles do. “One More Dollar” is as simple and innocent as a freshly-baked bread: a guy’s luck ran out, and through no fault of his own, poor fella. Of course you can help him out, and you give him all your pocket change and you Venmo an additional $20. You wonder what possessed you to harbor uncharitable thoughts about this guy when he first called out to you from the park bench. You give generously and move on. Not for one second do you think you’ll see him on the same bench two weeks later asking again for one more dollar.