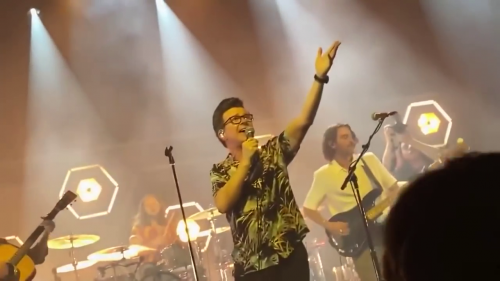 ’80s pop star Rick Astley was a surprise guest at indie pop band Blossoms’ recent live show in Camden Town, London. Together, they covered some of Manchester rockers The Smiths‘ most well known tracks, “This Charming Man” and Panic.”

Both of these songs perfectly show off Astley’s vocal range, and Blossoms keeps the song arrangement close to the originals to the delight of the crowd, who are singing loud enough to drown out Rick himself. Astley then announced that he and Blossom would be performing two shows in October consisting purely of Smiths covers.

One Smith, however, did not approve. Johnny Marr tweeted that “This Charming Man” was “funny and horrible at the same time.” He cryptically added, “I met The Blossoms a few weeks ago and they elected to not mention it. Nice. I’ve got no problem with tribute bands or with anyone doing anyone’s songs good or bad. I’ve got no problem with Rick Astley. There’s a back story. That’s that.”

Very strange, but either way, if these two preview tracks are anything to go by, then these shows will be an excellent night out.

More clips of the tracks exist on Twitter, but start with the clip below.