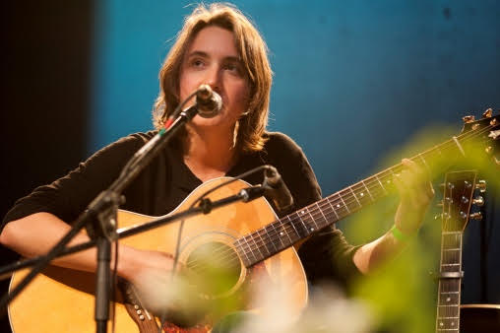 If you’re familiar with Brian Eno‘s pre-ambient solo work, it’s quirky, dense but catchy ’70s art rock. His second album, Taking Tiger Mountain (By Strategy) is a pretty classic example. Eno hides his catchy melodies behind his somewhat unconventional voice and all sorts of strange instruments. “The Fat Lady of Limbourg” actually has one of the sparser and more restrained arrangements.

Canadian singer-songwriter Myriam Gendron has taken that sparseness to its logical conclusion on her new cover of the song. She recorded it as part of her Lagniappe Session for Aquarium Drunkard, along with songs by Michael Chapman, Billy Edd Wheeler and Leonard Cohen.

Gendron replaces Eno’s low, bass-end keyboard with an acoustic guitar. Already we’re in different territory because an untreated acoustic instrument is basically the last thing you’d expect on a Brian Eno song from this era of his career. It’s just Gendron and her guitar for the first verse. For the second, she adds a subtle echo and to replace Andy McKay’s heavily distorted horns, Gendron plays a lightly distorted flute.

Gendron’s version of “The Fat Lady of Limbourg” manages to both sound remarkably similar to the original and extremely different at the same time. It’s a primarily acoustic cover of a song with zero acoustic instruments that still manages to resemble it rather remarkably.

To hear all four songs Gendron covers for her Lagniappe Session, click here.