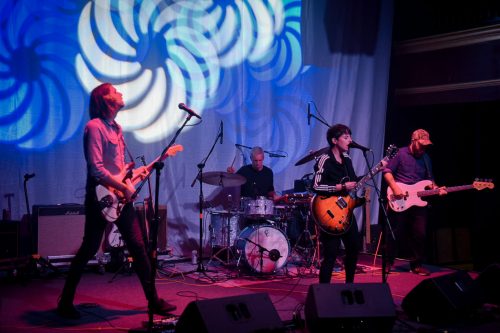 Hop Along have an abiding love for their hometown of Philadelphia. The multi-genre band came up in the city’s basement show scene, gaining fans organically through the ‘10s prior to their signing with Saddle Creek, who offered the band’s most recent pair of releases, Painted Shut and Bark Your Head Off, Dog, to a large and eager national audience. Alongside groups like Dr. Dog, The War on Drugs and Japanese Breakfast, Hop Along are now one of the City of Brother Love’s finest indie exports; the band have proselytized about Philly and its rife creative energy throughout their rise. As part of their fall tour, the band displayed some not-so-subtle hometown pride, cheekily covering a classic of Philly Soul for their encore: “Don’t Leave Me This Way,” written by the inimitable songwriting partnership of Kenny Gamble and Leon Huff (alongside lyricist Cary Gilbert).

Hop Along’s cover is loving and punchy, taking the disco grooves in stride with the band’s rawer sounds. Singer-guitarist Frances Quinlan gives a knowing wink as they take some core performance cues from the likes of both Teddy Pendergrass, who’s featured on the iconic Harold Melvin & the Blue Notes version of the song, as well as Thelma Houston — whose 1977 pure-disco version acts as the cover’s main touchpoint. Both of those vocalists follow the tune’s contours to extremes; Quinlan does something similar in terms of following the same macro arc, but the similarities stop there. Their voice is a singular powerhouse instrument in the realm of indie music — flipping frequently, and seamlessly, between tender ballad whisper and full-throated emo snarl. Given the big highs and lows of “Don’t Leave Me This Way,” it’s uncanny how great of a fit the song is for Quinlan. The full band seem attuned as well to the song’s buoyant energy and ecstatic peaks, with plenty of tunes in the Hop Along arsenal that reach similar heights.

The band are clearly having a good time hamming it up a bit on stage too. Quinlan tosses off a cheeky intro at the top of the performance: “I hope you guys like disco!” The cover makes for a refreshing update to a Philly staple; without Hop Along’s loving touch, “Don’t Leave Me This Way” would likely not be getting quite as much (brotherly) love this fall. Check out the cover below — this performance was drawn from the band’s tour-closing show at NYC club Brooklyn Steel earlier this month.