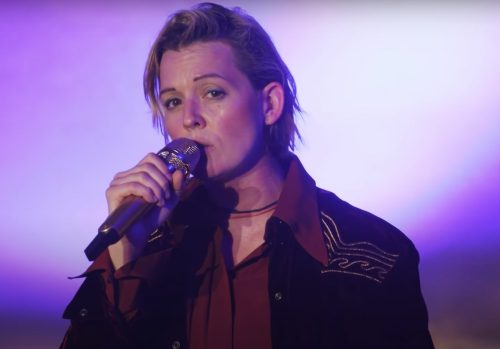 Brandi Carlile is in the midst of a massive fall, having just released her latest studio record, In These Silent Days. She’s also found time to work in a number of tributes to one of her biggest musical forebears, Joni Mitchell: covering her classic “Woodstock” in a recent small but splashy SiriusXM live gig, and selling out a one-night-only full-album performance of Mitchell’s Blue at Carnegie Hall, set to take place in early November. And now Carlile has offered up another instantly iconic cover during the new studio album’s rollout, this one from an entirely separate musical legend that she also counts as a friend & fan: Elton John.

Carlile performed a cover of Sir Elton’s “Madman Across the Water” in an appearance on The Howard Stern Show. The live version features a guest string quartet and Carlile at her stage best, even in a cramped studio. She and her band (the trusty Hanseroth twins, Tim and Phil) are totally enveloped in the tune, and you’d be convinced the song was her own based the perspective she offers in the song’s introduction. Of the titular Madman (and, to some degree/by proxy, of John himself), Carlile describes: “I think that he’s a man of great wisdom who makes a spectacle of himself, and realizes that he’s being laughed at, and that he’s not being fully appreciated for his genius… but, you know, he can kind of take it.” While Carlile isn’t one for much in the way of stage spectacle, she follows in Sir Elton’s footsteps here with a cover that’s powerful and, as she describes it, “unhinged.”

Most of Carlile’s original songs are taut pop constructions, so it’s a small joy to hear her stretch out musically with the guest musicians in this live version. The cover runs about six and a half minutes long, and never loses steam.