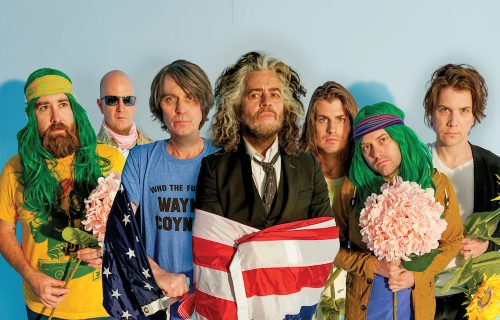 The Flaming Lips’ covers projects often come with weird twists. They’ve covered “A Day in the Life”…with Miley Cyrus. They’ve covered Dark Side of the Moon…with Henry Rollins and some band called Stardeath and White Dwarfs. And, in the newest incarnation, they’re releasing a Nick Cave tribute record…fronted by a 13-year old.

The 13-year old in question is Nell Smith, a Flaming Lips superfan who met frontman Wayne Coyne at a show. Their Cave covers album, Where the Viaduct Looms, comes out October 25. And, from the sounds of lead single “Girl in Amber,” it could actually be pretty great (something you can’t always say about these gimmicky Flaming Lips projects).

Coyne said in a statement, “It is always great to meet excited, young creative people. With Nell we could see she is on a journey and thought it would be fun to join her for a while and see if we could get things going. It was a great way to connect with her and help harness her cool attitude to making music.”

Smith said, “I still really can’t believe it, it was hard to get through all the songs but Wayne was so encouraging when I was struggling with a few of them that I kept going. It was a really steep learning curve. I hadn’t heard of Nick Cave but Wayne suggested that we should start with an album of his cover versions, and then look at recording some of my own songs later. It was cool to listen and learn about Nick Cave and pick the songs we wanted to record.”

Update: Cave himself just commented on the song in his newsletter The Red Hand files:

I didn’t know about this project, so thank you for alerting me to it. I have a whole lot of time for The Flaming Lips — really like a lot of their stuff, have been an admirer since watching them play most evenings on the Lollapalooza Festival tour in ’94, maybe even sang with them there, and wrote a song for one of their records. This version of Girl in Amber is just lovely, I was going to say Nell Smith inhabits the song, but that’s wrong, rather she vacates the song, in a way that I could never do. I always found it difficult to step away from this particular song and sing it with its necessary remove, just got so twisted up in the words, I guess. Nell shows a remarkable understanding of the song, a sense of dispassion that is both beautiful and chilling. I just love it. I’m a fan.

Listen to their “Girl in Amber” below, as well as – speaking of surprising collaborations – the song the Lips did with Cave himself a few years ago.