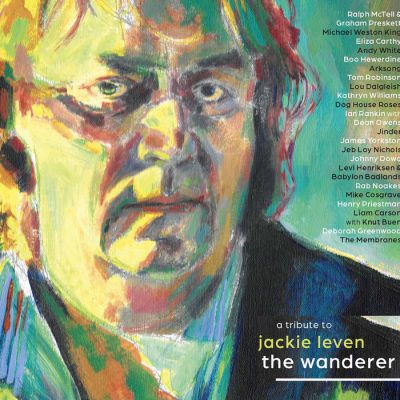 How to begin to explain the enigmatic giant that was Jackie Leven? Most reviews, in his life and beyond (he died in 2011), will comment on the mystery that he were not better known and better acclaimed. Uniformly lauded, somehow, possibly even deliberately, he remained so far under the radar as to be non-existent. Not that his talent, or he, were easy to hide, both being immense. If The Wanderer: A Tribute to Jackie Leven opens a few more ears to his music, it will have served a purpose, although I suspect it may more appeal to the already converted, a hard knit, hardcore bunch who talk in awe of his live performances. Please let me be wrong, and if, as you read this, you find yourself unfamiliar with the name, go seek him out. A retrospective collection also released recently, Straight Outta Caledonia, is as good a place to start as anywhere.

Some brief bio is probably mandatory here, to explain his paradox. Already touched/tainted by the music industry by the time his 1994 EP debut Songs From the Argyll Cycle appeared, Leven had already been a soft-voiced folkie troubadour and a member of the sometimes alarming, and always intimidating, Scots post-punk band Doll by Doll. That band, always on the respective cusps of breaking through and imploding irrevocably, eventually did the latter. Shortly thereafter, random street thugs attacked and strangled Leven, causing him to lose his voice for a number of years. Heroin was the solution taken, seldom if ever the correct one, but Leven had the strength and forbearance to overcome this and to be influential in the care of others similarly afflicted, founding the CORE trust, to provide holistic care, support and treatment to addicts. (Now part of Westminster Drug Project, 50% of the profits from The Wanderer go forward to that organization.)

Having found again his voice, he found also he had a tireless, ceaseless muse, a need to write, producing record after record. Martin Goldschmidt, the head of Cooking Vinyl, had the foresight to put conventional wisdoms like sales and profit margins to one side, sponsored this torrent as best he could. Even he couldn’t keep up, necessitating a later parallel iteration, in the loose disguise of Sir Vincent Lone, on the similarly intuitive Glitterhouse label, as well as Leven putting out additional material on his own “Haunted Valley” fan club imprint. And then there was his album of spoken word monologue, Chip Pan Fire, under yet another name, Jackie Balfour.

Such prolificacy, so many songs, his style on record a clever mix of Celtic musing, soulful melodicism and rousing anthemic cavalcades, chock full of vivid imagery. Live performances were much simpler. Leven, usually alone with a battered guitar, showcasing an awesome technique embracing both the strings and the percussive aspects of the body. A tapping foot, always miked up. And that voice, the aural semblance of the best and the most warming hot toddy ever taken, whisky, honey and calm. Utterly magnificent and always the same, whether playing to an audience in tens or in hundreds, giving his all, a self-deprecatingly caustic wit running through the tall tales told between songs. (Can you tell I’m a fan?)

This project was stage managed by Michael Weston King, the erstwhile frontman of the Good Sons, and current half of My Darling Clementine, no stranger to these pages. Leven had produced his 2003 album A Decent Man and led the live band for its live presentation, the only time I ever saw him play electric guitar. King has never stopped singing his praises, and has performed solo tribute shows of Leven songs. Here he has rounded up a collection of like-minded spirits to take on a collection of some of Leven’s finest, split over two discs, called “Gentle Man” and “Hard Man.” These were the twin sides of the Leven personality: an intrinsically tranquil seeming presence, able to sing eloquently of beauty of rain in the forest, yet with a searing fascination into the harsher realities of the human condition, and the darkness within, something to which he was drawn, able to find some understanding for the badness capable within us all. Artists as disparate as Eliza Carthy, Tom Robinson and Johnny Dowd here deliver wryly personal takes, offering a mood of remembrance and reverence that is as entirely human as were the originals. Another presence is the Edinburgh crime fiction writer, Ian Rankin, who performed and wrote with Leven in later years, and who had this to say about him. 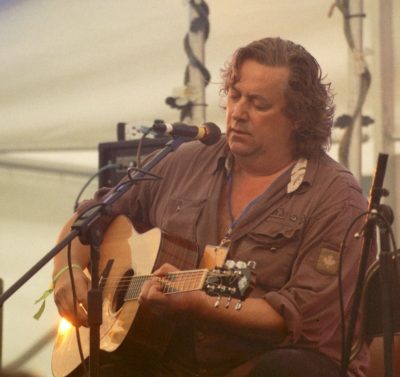 The first disc opens with Ralph McTell’s version of “Sick Harbour Lament” and has the unenviable task of inviting comparison with the original. With a frailer voice than Leven’s, it has been pre-released as a taster, and tries no more than to be a faithful memory, sufficient to confirm this is unlikely to a record of any radical revision. But then Eliza Carthy upends “The Garden,” finding unrealized Brecht/Weill depths within the song, initially disconcertingly so, bedding in on further listens.

Expatriate southern soul man, Jeb Loy Nichols, now resident in Wales, mines the rhythmic soul of “The Workingman’s Love Song” to the max, with a near Latin vibe that transforms the song delightfully. Boo Hewerdine, that consummate songwriter of so many songs with Darden Smith and Eddi Reader, then Weston King follow with a couple of songs, that are again poignant renditions, both constructed with a palpable affection. “The Final Reel,” the MWK song, is, itself, actually not a Leven song, being written by the singer in tribute to and of his friend, if somehow sounding typically Levenesque.)

Kathryn Williams offers a delicate ethereal take on “The Crazy Song” before Arksong, the latest iteration of Mark “Hobotalk” Pilley, tries just that little too hard to evoke the presence of The Wanderer‘s subject. Thankfully, James Yorkston is on hand to follow up with of the highlights, a bleakly fragile whisper through “Empty in Soho Square.” If nothing else, the song titles will be giving you a good idea of the lyrical territory explored.

Needing to maintain this level, Mrs. Weston King, Lou Dalgleish achieves this with the solo piano and voice of “One Long Cold Morning,” which is as glacial as the mood. The penultimate track gives one truly spooky moment. Ian Rankin’s spoken word “Edinburgh Winter Blues” is narrated in a voice so similar to Leven’s own as to give shivers up my spine. Up and coming Scottish Americana artist Dean Owens offers the backing vocal and the background melody, ahead of the closer, aptly and appropriately sung by Leven’s partner, herself a singer, Deborah Greenwood, with a loving and lovely “Universal Blue,” one of the most evocative of his songs. 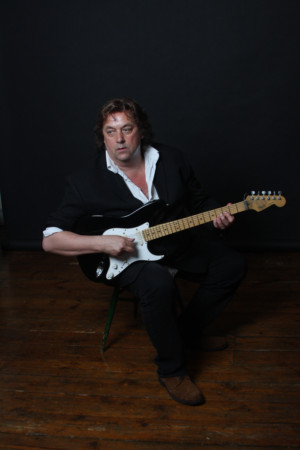 Annoyingly, the second disc is a bit more of a muddle, and struggles for identity. I think the contrivance is to try and have these songs to portray the more muscular side of Leven, which actually fails, as many of the songs are still, bar the subject matter, as pastoral as anything on disc one. There are also a couple of originals deigned to be in the style, but with a good deal less craftsmanship than Weston King had offered on that first disc. Andy White, the Northern Irish singer-songwriter, re-emerges from Australia with a straightforward romp through “Standing In Another Man’s Rain,” with little to stand out other than the pleasure of hearing again his swagger. The duo of Dog House Roses follow this with one of the best songs on the whole project, deftly deconstructing “Elegy For Johnny Cash” into a country hoedown. A little more revisioning like this may have  added a greater luster to the album overall.

Johnny Dowd then takes a typically idiosyncratic axe to “Farm Boy” that you will either love or hate. I started off in the latter, but the relentlessness of the delivery took me to the former, enjoying also the apparent return of the same primitive drum machine used on the early Leven recordings. Thereafter Tom Robinson doesn’t really have the gravitas to convince on his track, with Rob Noakes, a singer I admire, likewise not strong enough to draws in sufficient weight for “Poortoun,” a song that requires a full immersion within the lyric.

“Paris, Blues,” in the hands of the ex-Christian Henry Priestman, who played on the early releases, comes over a little slight, needing Jinder, who also sang the harmony vocal on Debbie Greenwood’s “Universal Blue,” to bring back some balance, with a trad.arr. ambience to “Main Travelled Roads.” Leven was big in Norway, it seems, which accounts for Levi Hendrickson’s appearance here with his cod “Elegy to Johnny Cash”-lite, “Just Like Jackie Leven.” I just didn’t take to it, nor to the spoken “I Weep” by Liam Carson, although I did enjoy the background violin tune, based on a traditional Norwegian air. I get where it is coming from, but the words, in the end, grate, as being too obvious and by numbers.

Between these sore thumbs comes “The View from Shit Creek” by Mike Cosgrave, another erstwhile collaborator who did many a tour alongside Leven, providing keyboards. Undoubtedly another highlight, this delicate song is infused with subtle brass over Cosgrave’s keyboard and light vocal, with echoes of a storm forming disconcertingly in the background. To end the show comes John Robb of and as the Membranes, perhaps the only player here who had any congruency with Doll by Doll. “More Than Human” is a typically abrasive Doll by Doll song, which the Membranes perform very much in the spirit of that band. A necessary and important part of the Leven story, if a bit of a shock for those who came later to him. Agreeably so? You be the judge.

The Wanderer is a largely very good album, if a little too long, perhaps the better for a cull of at least a couple of the songs. Will it help draw attention to Leven? Much as I hope and want it to, I fear it may continue to preach to the converted. But it is a timely piece and I congratulate Weston King for his commitment. Big Jackie may just have smiled at the conceit, and would probably have a fair bit to say about it, between songs. Strangely, my money is that he would appreciate most the Johnny Dowd.

Finally, a word about the packaging, a sturdily contracted gatefold digital, with lavish accompanying notes, that include thoughts and reminisces from most of those appearing, together with other associated. The whole experience leaves a glow of contentment that has me reaching for the original albums on the shelves behind me.

One Response to “Review: The Wanderer: A Tribute to Jackie Leven”