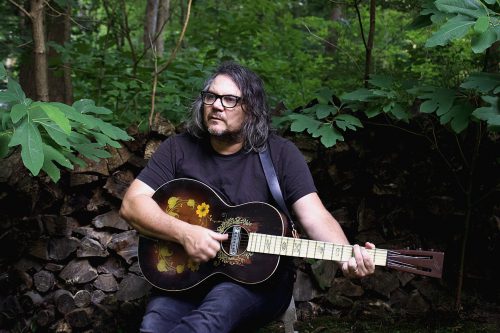 Though we’re admittedly lagging one episode behind here at Cover Me, we’re still properly chuffed to finally bring the affable Ted Lasso into our coverage fold. For the occasion of the ninth episode of its second season on Apple TV+, Jeff Tweedy has shared a melancholic cover of the Ted Lasso theme song usually performed by the show’s co-composer Marcus Mumford.

Tweedy’s version for the opening credits is sparse and compelling, with the quiet power of an off-mic acoustic encore performed for a rapt audience. It feels like a true Bizarro World edition — striking a massive contrast to the bighearted optimism of Mumford’s now-familiar theme. The dark and anxious energy of the cover feels especially well-suited for the bottle episode in which it appears too — following a heady all-nighter pub crawl/vision quest with Lasso’s fellow Kansan and consigliere on the football pitch, Coach Beard. In a show that’s prided for its familiar comforts, Tweedy’s cover offers, relatively speaking, a welcomed jolt.

At the moment, Jeff Tweedy’s cover of the Ted Lasso theme appears to only be available “in-house,” i.e. exclusively via Apple Music. (I can’t help feeling like the sardonic Coach Beard would give this bit of nepotism a deserving eyeroll.) Check out the cover below.