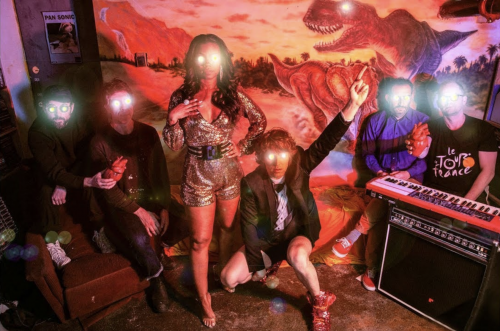 The music of !!! can feel confounding on first listen. The group, whose name is pronounced “chk-chk-chk,” have made a rats’ nest of dance-punk releases across two decades, and their name sets somewhat of a high barrier of entry as to what they’re all about. Beneath the blistering production (and hard-to-Google identity) though, you’ll find a band with unflagging creative momentum and, especially on their recent records, some properly funky instrumental chops.

Both of these strains are present in the group’s latest release, a pair of covers. At face value, the selections — Tracy Chapman’s “Fast Car,” and “Man on the Moon,” by R.E.M. — seem like they’d bring the group down to earth a bit. But what !!! chisel out here is something well removed from the songs’ earnest acoustic core.

The “Fast Car” cover zooms past any shred of the sentimental story in Chapman’s lyrics — transforming the song into a glitchy car chase soundtrack:

And “Man on the Moon,” featuring vocalist Meah Pace, sounds like some cosmic blend of Del the Funkee Homosaspien and Mellow Gold-era Beck:

!!! achieve something here resembling lounge-cover-er Richard Cheese in their execution. I mean this as a compliment; the group find deft new ways to crack both songs, smashing the raw parts of each into something unrecognizable, shocking and funny. Who knew that Tracy Chapman and R.E.M. were actually making blitzed dance-funk all along?