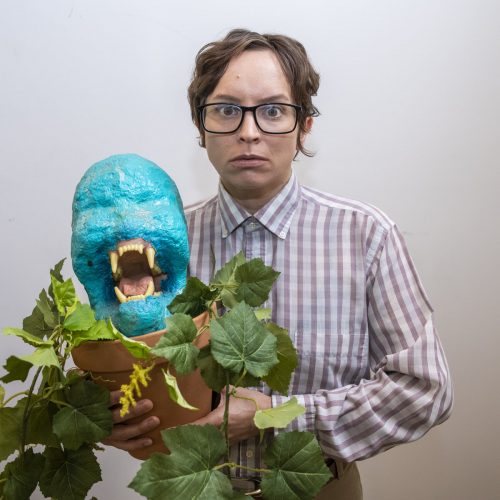 Little Shop of Horrors is legendary among rock musicals. Adapted for the stage from the ‘60s B-movie — and then into a subsequent second film in 1986, based on that stage production — by Alan Menken and Howard Ashman, Little Shop’s songs are a wild melange of doo-wop, surreal soul and bubblegum pop. Yet by comparison to some other Big Rock Musicals, the show and its soundtrack have seemingly never had much of a crossover moment. Grease, Hair, Jesus Christ Superstar, The Wiz: all rely just as heavily on dark wit, big smirks, tight hooks and killer rhythm sections; each has generated some big-time, (counter)culture-permeating, standalone pop tunes. But, alas, not so with Little Shop.

Thankfully, A Giant Dog seem keen to change this track record. The Austin-based group have shared a campy power pop take on Little Shop’s “Suddenly Seymour.” Though the production feels decidedly homespun, A Giant Dog go all-in on the song’s grand 11 o’clock-number energy, adding some glammy synth arpeggios and a heavy, arena-scale drumbeat. Vocalist Sabrina Ellis takes on both parts of the iconic duet — Audrey and Seymour — with a particularly punky aplomb (plus the backing doo-wop echoes for good measure too). The band fully inhabit Little Shop of Horrors’ dark comedic spirit, but what’s most fun about this version is hearing “Suddenly Seymour” have a chance to be properly scaled up and, deservedly, rocked out.

A Giant Dog’s “Suddenly Seymour” was made for the film MOXiE!, produced by Amy Poehler and released (with some degree of controversy) on Netflix earlier this year. Only recently did the band give the cover its own independent release apart from the film — via Bandcamp, this month. The track surely stands alone on its own merits, and its a lot of fun. Buy “Suddenly Seymour” from the band here, and check it out below.