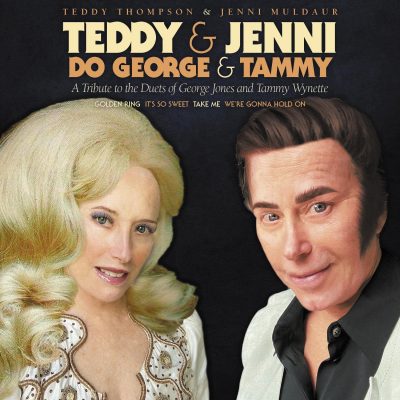 As with the last EP, David Mansfield is in charge, his magic hands on the production dials and much of the instrumentation. His love of the genre and of the period is obvious, managing to display the classicism of the songs and yet avoid most of the residual kitsch of the originals. A lower fat and less sugary re-envisioning that maintains all the goodness, but with a slightly more up-to-date taste. Some salt with the saccharine, then, tears with the honey, as befits the prevailing lyrical content.

“Golden Ring” is the opening track here, a two-verse distillation of the Jones/Wynette story, if with the reality owing rather less to the pawnshop. Or, possibly, not. This differs very little in arrangement from the original; there’s less orchestration, but they choose to keep the choral backing vocals that so date this from its time. It’s a rare false move.

“It’s So Sweet” is on much safer ground, with a real Gram & Emmylou feel, Parsons being another Jones superfan. But it is in feel alone, especially in the harmony. When Thompson and Muldaur’s voices are separated, they each show their own identity, here displayed as strongly as anywhere on these two volumes. The piano is glorious, very Glen D. Hardin-esque, the steel a warm background glow. If you know the original “It’s So Sweet,” this cover is very, and deliberately, sympathetic to that, and nothing like Dwight Yoakam & Kelly Willis’s much twangier take on it.

“Take Me” is one of those country blockbuster songs, possibly even daring in the declaration/instruction Tammy makes at the start, and must have helped a few bruised hearts feel mended on saloon dance floors, locked in the clinch of the next true heart. Originally appearing on Jones’ 1965 album, it is there an altogether different beast, a slow, languid waltz, almost a longing blues, a song of unrequited love. This version is a little less brash. Thompson and Muldaur sound a little more bashful, which gives a charming aspect absent in the George and Tammy original, no matter how daft some of these lyrics are (and they are).

Final song “We’re Gonna Hold On” is the highpoint here, a jaunty carousel of intent, with a bouncy hoedown rhythm, although do I again her the taint of a choir in the wings? Again, fairly faithful to the original, including the hooooold in the “hold on,” it is a song that has aged better than the other originals here. Those with an interest might note that George Jones has a writing credit for each of these last three songs. (Those as choral-phobic as I will note that Mansfield, Thompson, and Muldaur considerably wind down that aspect in their rendition, so on that basis, and to my ears, it is an improvement!)

George & Tammy is a bit of a step back overall from Porter & Dolly, I feel, although that’s perhaps more a critique of the material available to Teddy & Jenni rather than the quality of their performance, which (choir apart) remains stellar. Conway & Loretta get “done” next, and I can’t wait.