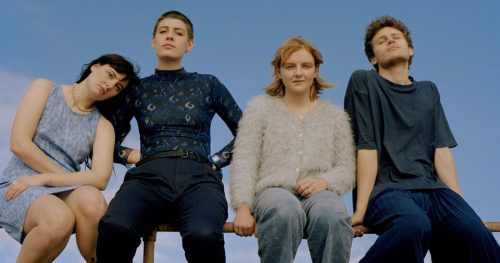 UK indie pop quartet Porridge Radio have shared a raw, tender cover of The Shins’ “New Slang” as their contribution to the Sub Pop Singles Club, the storied label’s series of limited-edition releases. In their cover, Porridge Radio harness “New Slang”’s earnest spirit and bookish introspection, bobbing along at the clip of a single jangling tambourine just like the original. The band keep the iconic hum-along harmonies intact, accompanied here by a droning violin and some airy keyboards. Dana Margolin’s vocals deserve an honorable mention too, with a performance that feels as eroded and fragile as it does unshakeable.

But it’s the way that Porridge Radio play with time and pacing that really sets their cover of “New Slang” apart. The band stretch many of the song’s offbeat cadences and transitions ever so slightly, transforming them into small moments of tension. The intricate changes in pacing almost feel subliminal when heard in real time. But, cumulatively, they amount to a totally new, fascinating and arresting version of The Shins classic.

For its release in the Sub Pop Singles Club, Porridge Radio’s b-side cover of “New Slang” is featured alongside another ‘00s Sub Pop classic — Wolf Parade’s “You Are A Runner And I Am My Father’s Son.” Listen to both on Bandcamp here, and check out The Shins cover below.

Check out many more covers of The Shins here.