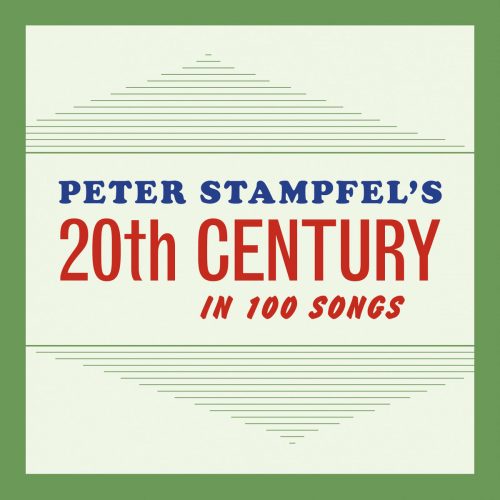 People come up with crazy schemes all the time – what’s less common is when someone actually goes through with said crazy scheme. Americana legend Peter Stampfel, formerly of The Holy Modal Rounders and The Fugs, is that someone.

Back in 2001, Stampfel happened upon the idea of making an album that featured a cover representing each year of the 20th century, and after twenty years of off-again on-again work, Peter Stampfel’s 20th Century in 100 Songs was finally released this past February. For those who pick up the five-CD physical edition, the music is accompanied by Stampfel’s detailed liner notes, in which Peter explains his song choices, offers biographical information about the songwriters, and reflects on the (often humorous) part these songs have played in his own life story.

Stampfel’s 100 songs can be loosely broken down into four parts. First, we have tunes from pre-1920, before the influence of Jazz took hold on American music. Although these songs predate Peter’s birth, his notes reveal that many of them were still very much in circulation during his youth. Most of these songs have a sepia-tinged quaintness about them that bring to mind a simpler, more innocent time, but the harsh realities of life occasionally peek through. In particular, “Nobody,” with lyrics by vaudeville performer Bert Williams (“You could say he was the first black superstar,” says Stampfel in his notes) paints a sobering picture of hard times. Stampfel elaborates that Williams “had to hire a white man to pretend to be his manager, because theatres wouldn’t put money into a black man’s hand.”

From here we progress into the Great American Songbook era, a period previously explored by Stampfel on his 1995 album You Must Remember This (two tracks from that album, “Indian Summer” and “It Isn’t Fair,” reappear here). One of the amazing qualities of 20th Century is that, even though Peter makes no attempt to replicate the instrumentation of the original recordings – which, for a lot of these songs, would have been big bands or orchestras – he still manages to evoke the time period that the songs originate from. As Stampfel writes in the notes, one of his rules for song selection was that each tune “had to feel like that year.” For example, there’s something extremely 1940s about Peter’s take on “Indian Summer,” even if it’s hard to pinpoint exactly what that something is.

Moving on, Peter guides us through the third section of his odyssey, which encompasses the massive shifts that took place in American music during the ‘50s, ‘60s and ‘70s. The is the material that Stampfel sounds most at home with, presumably because this was the music that surrounded him as his own career took shape. Rock ‘n’ roll comes bulldozing in with Fats Domino’s “I’m in Love Again”; soul makes an appearance with Jan Bradley’s Curtis Mayfield-penned hit “Mama Didn’t Lie”; and the Great American Songbook gets one final kiss-off with “Moon River.” We also get our first of several selections from the UK, in the form of “Waterloo Sunset” (Stampfel explains in the notes that British and American music effectively merged following the British Invasion).

This would be as good a time as any to mention Stampfel’s voice. Since this album was recorded over a two-decade period, it would be natural to expect some kind of vocal shift. However, something else is at play: several years ago, Peter was diagnosed with dysphonia, a condition that has a devastating effect on the vocal cords. The result is that the dynamic, idiosyncratic voice that Stampfel sings in on the first two-thirds of the album is gradually replaced by a much more constricted, whispery vocal. Surprisingly, what could have been a project-ender actually turns out to be a major asset. Producer Mark Bingham skillfully arranges the songs so that Peter is nearly always supported by a helpful violin, accordion, or backing vocalist, while Stampfel himself rises to the challenge by breaking out some Dylan-level phrasing that more than makes up for his lost range – not least of all on a fiddle-driven “Tangled Up in Blue.”

Peter also reveals a talent for imbuing seemingly meaningless lyrics with an incredible amount of beauty and poignancy – check out his take on Middle of the Road’s “Chirpy Chirpy Cheep Cheep.”

Stampfel confesses in the notes that he hit a wall as he traversed the 1980s – not because he didn’t care for the music, but because there was simply too much music to keep up with. Nevertheless, enlisting the help of music writers and fans to fill in the blanks, he powered on. By this point the album begins to feel like an epic marathon, and you can’t help but cheer Peter on as he gets closer and closer to the finish line. When he sings “I can’t stop” at the beginning of the Fine Young Cannibals’ “She Drives Me Crazy,” it sounds as though he’s willing himself onward.

Elsewhere, Peter’s crowdsourcing of song selections results in one of the best performances on 20th Century: “Earth to Grandma” by The Ass Ponys, where Stampfel actually bursts out laughing at one point. Being an older recording, it also features the fleeting return of Peter’s old voice.

But the cherry on top of this enormous cake is the closing track, a cover of Coldplay’s “Yellow.” Arrangement wise, Stampfel stays pretty close to the original, but the song is transformed into something profoundly moving by Peter’s more-fragile-than-ever vocal. In the context of the album, the words “I swam across, I jumped across for you” sound like a summing up of this wonderful, crazy journey through 100 years of music.

This is just a brief overview of Peter Stampfel’s 20th Century in 100 Songs – many highlights (and downright oddities) have been left undiscussed! The best way to enjoy this eccentric masterpiece is to carve out four-and-a-half hours of alone time and listen to the whole thing from start to finish.