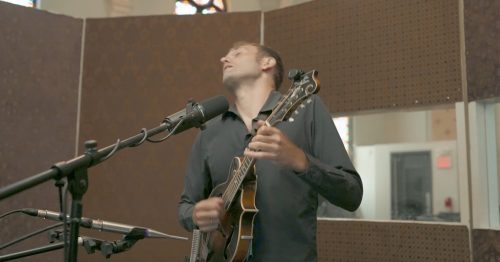 In a new video, Nickel Creek’s Chris Thile performs Buffy Sainte-Marie’s “God Is Alive Magic Is Afoot” solo on mandolin. It’s a song he recorded on his new album Laysongs, and in a way it’s a cover of a cover, as Sainte-Marie adapted it from a Leonard Cohen poem back in 1969. Thile doesn’t have her distinctive singing voice – few do – so he makes it his own.

Sainte-Marie improvised the music for her version back in the ’60s. “I knew what the poem was about, and I knew how the music would feel in my head, but like, flamenco, I didn’t know where I was going from line to line,” she later said. “If it sounds stream of consciousness that’s because it is.” Thile followed her lead, calling his version “an improvisation on her improvisation.” He expanded to Atwood Magazine:

Yeah, I just love how comprehensive it is. I love [Cohen] conflating the idea of God with the idea of magic and time and flesh. And then the sense of mystery, it’s there in his, but I love that Buffy just like, triple underlined and capitalized the mystery of it all. That thought of, what madness leads us to feeling like we know anything about what all is going on? Why do we not marvel over the magic when we see it? Why do we try and explain it away? Why do we discount other people’s attempts to explain it? Why do we belittle other people’s wonder at it? Why do we do that? Why do I do that? I do that all the time, and on both sides. When we happen to stumble across something good, we can do two things: there’s a beautiful side of humanity, the first impulse of which is to share that thing. And then there’s the dark side, where the first impulse of which is to put it in a safe. So I love how comprehensive that poem is, and then how alive Buffy Sainte-Marie makes it feel. My version is sort of an improvisation on her improvisation.

Watch Thile perform “God Is Alive Magic Is Afoot” from his new album Laysongs below.