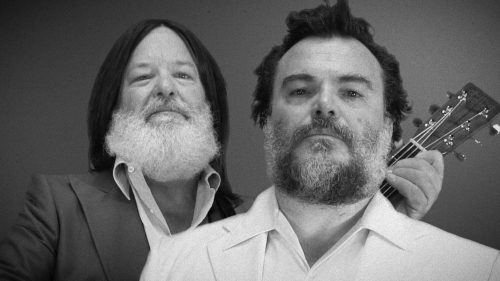 Rock Gods commune among us on the Internet these days. In a brief but cheery post shared to his official Facebook page earlier this week, Paul McCartney gave his hearty seal of approval to fellow (comedy) rockers Tenacious D’s latest release: an off-the-wall cover of The Beatles’ “You Never Give Me Your Money / The End.”

The video for the Abbey Road cover begins in stark Richard Avedon-style grayscale, suggesting that the duo, a.k.a. Jack Black and Kyle Gass, may be opting to play the track relatively straight. But The D do not disappoint. As the medley’s iconic pocket-sized sections begin to rapidly unfurl, the cover and its genuinely insane accompanying video get wackier by the second, complete with some smutty lyric alterations. Black and Gass sing atop mountain peaks and forest streams, plunge into toilet bowls, and prance around Stonehenge. At the end of “The End,” the pair even make a cosmic dive together into the Pacific Ocean, swimming grandly on toward Rock Valhalla. Who could ask for more?

Tenacious D’s cover of The Beatles’ “You Never Give Me Your Money / The End” was released digitally by the duo earlier this month, but the single will have an exclusive vinyl release later in 2021. Proceeds from the single’s sales will benefit Doctors Without Borders. Pre-order the 7″ single here and check out the cover below.

Check out more Tenacious D covers here.
Check out many more covers of The Beatles here.