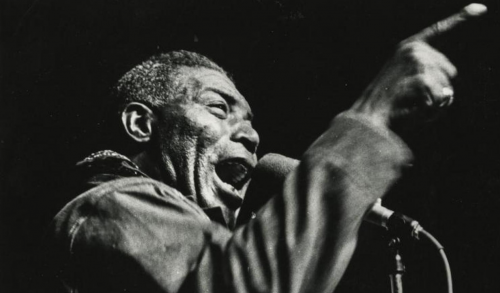 Born 111 years ago this week, Chester Burnett, better known as Howlin’ Wolf, was a blues musician who possessed one of the most distinctive voices in 20th century popular music, and who wrote some of his genre’s most enduring hits. With his rival Muddy Waters, Wolf defined the electric blues style that reverberated out of Chicago in the 1950s. This sound in turn altered the course of the nascent rock music genre, as youngsters like Keith Richards, Jimi Hendrix, and Eric Clapton absorbed Chicago blues, and brought their own trippy flavor of it to new and wider audiences. Wolf was among the first black musicians to capitalize on white youths’ love for the blues form.

Growing up in the Mississippi delta, Wolf learned acoustic blues directly from its best practitioners and originators—among them Charlie Patton, Son House, and Robert Johnson. Wolf merged the rural blues with the country music stylings of “blue yodeler” Jimmie Rogers. “I couldn’t do no yodelin’,” Wolf stated, “so I turned to howlin’.” In addition to howling, Wolf took up harmonica and guitar.

Wolf’s merging of country music forms was only the beginning of the full transformation to come. Along with a million or so other African Americans from the south, Wolf headed north in the 1940s (first stop: West Memphis). A vibrant Black urban culture had begun to flourish up north, thanks to greater personal freedoms and better labor conditions. Those northern industrial jobs put their stamp on the new kind of blues taking shape: the amplification and distortion, the mechanized rhythms played at volume, all seemed of a piece with long gritty shifts on the factory floor. At the same time, the electrified blues were more than ready to party down.

By the early ’50s, Wolf had signed with Chess Records, and moved to Chicago where the influential label had set up shop. Wolf and his band churned out hits that became standards of the form, such as “Smokestack Lightning” and “Killing Floor.” Some of these hits were Willie Dixon-penned numbers, like “Little Red Rooster,” “Back Door Man,” and “Spoonful,” but it was Wolf who arranged and delivered them.

Soaring on a decade’s worth of successes, Wolf, Dixon, and other blues artists toured Europe in the early ’60s with the American Folk and Blues Festival. This concert series proved transformational–not just for the artists, but for the recording industry itself. Consider some of the teenagers in attendance at the England shows: Eric Clapton, Steve Winwood, Jimmy Page, and key members of the not-yet-formed Rolling Stones. When the Stones covered Wolf’s “Little Red Rooster” in 1964, it became the only blues number to reach #1 in the U.K. singles chart.

As the decade progressed, the Chicago blues became grafted to rock, and Wolf was the inspiration near the center of it. Cream spooled out 17-minute versions of “Spoonful,” Hendrix opened his sets with a torrid “Killing Floor,” and debuts from bands like the Yardbirds, The Doors, and Led Zeppelin featured Wolf and Dixon covers, sometimes in psychedelic or heavy metal disguise.

The early ’70s found Wolf revisiting his older material with some of the British bluesmen mentioned above, before returning to new material for what was to be his final album. Poor health and a couple of heart attacks cut short his career, and in 1976 Wolf passed away at the age of 65. His otherworldly voice was silenced, but artists who offer up their own renditions of his music keep his name alive.

Let’s begin by eliminating the usual formula that attaches to Howlin’ Wolf covers: the Fender Stratocaster + blues harp + menacing man thing. The multi-instrumental couple from Canada called Whitehorse thoroughly reimagine “Who’s Been Talking” without any of that. And they do it while sticking faithfully to the melody and the words of the 1964 original. The freshness stems from offbeat instrumentation (a melodica plays the main riff), a jarring male/female vocal duet (with voice modifications courtesy of unusual mics), and the rockabilly guitar work that feels more Stray Cat strut than Howlin’ Wolf blues. Bonus: the video is a fun watch.

Like the Whitehorse cover, this one features a male/female vocal treatment, perfect for this Wolf/Dixon staple  about sexual fixation.  This R&B-flavored cover came out within a year of Wolf’s recording. The two singers trade verses, but Etta James leads the way, reminding any listener that needed reminding that women, not just men, lie, cry, and die about it. On the chorus, Harvey Fuqua enters to sing alternating lines with James, before they croon in unison. Fugua, a key figure in the Motown scene and founder of the Moonglows, brings a low-down John Lee Hooker vibe to his verses, in contrast with the sparkle and shout of James’ contribution. And as for Etta, well, we’ve covered her many times before, and we aren’t done yet.

Ok, bring on the Stratocaster.

Judging by YouTube comments, it comes as news to some Stevie Ray Vaughan fans that his version is a cover, not an original. But that’s fair: the SRV stage persona is exactly the sort of badass who would commit a crime as quickly as retune his E string. This song may only have one chord, but SRV continually finds new angles of attack on it. Still, “Commit a Crime” is less a vehicle for mean soloing than it is a sort of vocal onslaught; SRV seems to enjoy snarling out spiteful lines like “you mixed my drink with a can of Red Devil lye / Then you sit down and watch me, hoping that I might die.” Vaughan tosses in a bit of “Smokestack Lightning” at the end, perhaps to better reveal his Howlin’ Wolf hand.

Before any major label got wind of grunge, Soundgarden was thundering along with concoctions like this: a loose take on Howlin’ Wolf, probably inspired more by Page and Plant than by Wolf himself, and filtered through hardcore punk and metal influences. To top it off, the band appended a take on Sonic Youth to their Wolf cover (but it got stripped from the re-mastered version embedded here, presumably due to copyright issues).

It’s a good bet that more than a few youthful enthusiasts of Soundgarden found their way to Chicago blues thanks to this cover, in the same way Nirvana later pointed their listeners toward Leadbelly.

Correction: it would have been a straight-up version but for the fact that this was a Christmas event, and lyrical liberties always have to be taken to acknowledge the holiday, and snowfall real or imagined must be mentioned, etc. Anyway, the show was for a Special Olympics charity, hosted in Washington D.C. by President Bill Clinton, likely with kids and the First Lady in attendance (don’t know, wasn’t invited). Petty knew this was not a song about poultry, and needed to soften it up a little.

BTW, if the mood seems a little subdued here, it might have to do with the fact VP Gore had officially conceded the 2000 election to Gov. George W. Bush hours earlier. (Petty had successfully made the Bush campaign cease and desist from using his songs at campaign events earlier that year.)

We’ll close with a solo acoustic take on Wolf, to boil things down to the essentials.

One Response to “They Say It’s Your Birthday: Howlin’ Wolf”