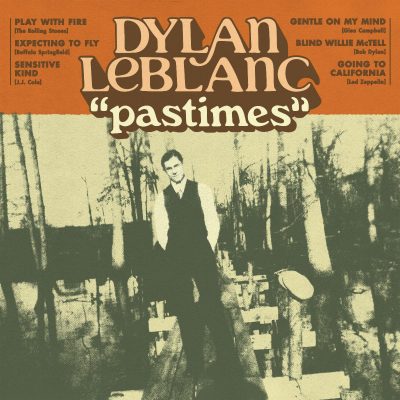 Like many a performer, Dylan LeBlanc spent the pandemic lockdown to good intent, producing Pastimes. This six-song EP consists entirely of covers, songs that have “inspired him musically and spiritually,” drawing back, as they do, on his childhood and the music he was exposed to by his father, a jobbing Nashville songwriter. Father and son spent Dylan’s teenaged years in the Nashville clubs, where LeBlanc senior was plying his trade as a writer and session man. And one, I might say, with a mighty fine taste in music.

Self-produced in Muscle Shoals, the performances on Pastimes are all live in the studio, with sympathetic backing from a mix of musicians, guitars, keyboards, steel and, gloriously, a string quartet. Strings can often over egg the work of sensitive singer-songwriters, the label most often attached to LeBlanc, but here they complement and complete the arrangements delightfully. These are not dramatic reframings of largely well-known songs; rather, these fall more into loving recreations, the respect for the songs–and, by default, the authors–hugely evident.

Pastimes opens with a slow burn through the Rolling Stones’ “Play With Fire.” This sets the stall admirably, the strings swooping about LeBlanc’s vocal, a much lighter presence than Jagger’s, imbuing an almost psychedelic vibe to the song. LeBlanc does something remarkable here, taking a song I have always felt a little lightweight and conjuring up a beauty earlier unrecognized.

With a voice not dissimilar to that of Buffalo Springfield-era Neil Young, LeBlanc’s version of “Expecting to Fly” breaks no molds, but may act as a timely prompt to listen again, or for a first time, to just how superlative was the work of this band. Young and Stephen Stills were writing extraordinarily maturely for that stage of their careers, and this song might surprise anyone who only knows the plaid and denim rock-outs of Crazy Horse.

Likewise, even down to the string arrangement, LeBlanc’s “Sensitive Kind” is an almost facsimile to JJ Cale’s original, the only difference being the exchange of Cale’s hoarse semi-spoken vocal for LeBlanc’s clear tenor. That alone takes this whole project way beyond karaoke.

Has “Gentle on My Mind” been covered too often? There is certainly no shortage of renditions of this Glen Campbell staple. But, with a song this good, the answer is almost always no, and LeBlanc’s is a welcome addition, the comfortable fit of the voice and the arrangement as cozy as the feel of having had both your jabs. The upsweep of steel at the end particularly endears.

Perhaps the highlight of this project follows, a bleakly melancholic piano and guitar rhapsody around “Blind Willie McTell,” a plaintive masterclass in wringing emotion. Here the strings are absent–a shrewd move, there being no need or desire for sweetness, especially as LeBlanc brings out the poignancy in the lyric: “nobody can sing the blues like Blind Willie McTell.” Here, Leblanc has a damn good crack at it.

The last of Pastimes‘ songs comes from the acoustic side of Led Zeppelin, “Going To California,” which makes it, by my reckoning, half a century old. With a voice not akin to Plant on crooning mode (high praise, believe me), LeBlanc’s slightly simpler take is a reverential and pleasing version, again without the string section. The song is at least equal billing with the others here, and the list of writers great and good, in terms of composition. Not bad for a throwaway cut on Led Zep IV. Oh, and my favorite and the least dated by time and over-exposure.

When one realizes that Dylan LeBlanc is barely in his thirties, all these songs written and famous decades before he was born, Pastimes is all the more remarkable. This is not an ad-hoc sample of vintage songs cobbled together to make a statement; these are much-loved heirlooms, passed down from father to son. We owe Mr. LeBlanc a huge debt of thanks. His son had done a mighty fine job with them, and this project is a worthy addition to his existing catalog, four albums of his own material that, if you like this, would certainly appeal.

You can buy Pastimes on Dylan LeBlanc’s Bandcamp page.