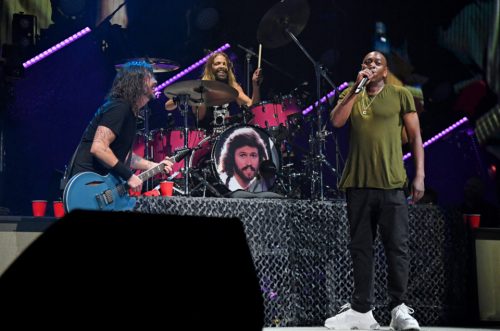 Foo Fighters have taken the World of Cover Songs by storm with a pair of incendiary news announcements this month. The first (and only slightly more believable of the two) concerns a cover that premiered in the Foos’ recent return to live concerts on June 20th. Playing for a vaccinated/full-capacity/sold-out crowd at Madison Square Garden, the Foo Fighters offered up a late-set debut of Radiohead’s “Creep” — featuring, in a drop-in of unrivaled proportions, Dave Chappelle on guest vocals. At best, the cover feels like live-band karaoke, albeit scaled up for The World’s Most Famous Arena. Chappelle alternates between “aw shucks” glances at the crowd, and hamming it up with sing-along choruses for the cheap seats. Any honest attempts at artistry aside, however, the pure, sloppy joy radiating from Chappelle, the Foos and the totally-psyched crowd — not to mention the FOMO radiating through my computer screen — couldn’t feel more potent.

In a second complete surprise, the Foos have also announced an entire forthcoming full-length record of Bee Gees covers — the amazingly-titled Hail Satin. In an Easter egg nod to the release, note how drummer Taylor Hawkins’s kick drum head at MSG was not-so-surreptitiously bedecked with Barry Gibb’s smiling face. Until the Bee Gees record’s release on July 17th for Record Store Day, all we have for now is a brief Instagram preview clip and a single live encore performance, also from the Madison Square Garden show.

Check out the Foo Fighters’ covers of Radiohead’s “Creep” (featuring Dave Chappelle) and Bee Gees’ “You Should Be Dancing” below.