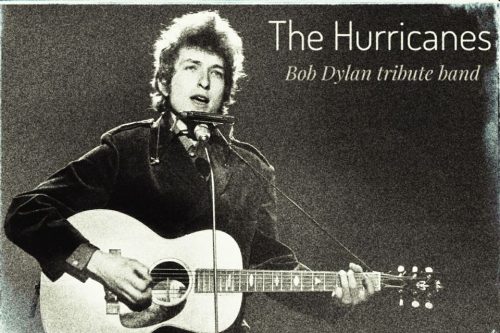 With over five hundred songs in his catalog and a fanatical following, Bob Dylan is a prime candidate for the tribute band treatment. As Dennis Bailey, founder of the Bob Band, wrote in his excellent essay about forming a tribute act (he prefers “cover band”), “To me, a Bob Dylan cover band is a genre band, like a blues band or a country band. Bob Dylan is a genre all its own.” So it follows that there are plenty of tribute bands out there ready to salute that genre, whether by playing the music or listening to it. Here’s a sampling of some of those who’ve made it their life’s work to bring Bob Dylan to the masses, whether they’re Bob Dylan or not.

The Hurricanes – Meet Me in the Morning (Bob Dylan cover)

Like most Dylan tribute bands, the Hurricanes have a name that connects to the man and/or his work – in this case, a reference to Dylan’s song about Rubin “Hurricane” Carter on the Desire album. Unlike most Dylan tribute acts, these aren’t middle-aged guys recalling past glories, but fresh-faced men who bring a youthful hunger to their interpretations. Even a slow song like “Meet Me in the Morning” benefits from their cool, vigorous vibe.

There are Dylan tribute bands who feel it’s part of the contract to imitate Dylan’s voice, be it his sand-and-glue sound or his Nashville Skyline croon. Big Brass Bed doesn’t feel that way, though, and they’ve recorded two albums of Dylan songs that prove that when it comes to tribute acts, it’s the song, not the singer. Which is not the same as saying they sing poorly, as “You’re Gonna Make Me Lonesome When You Go” should indicate.

“Chicago’s best Bob Dylan tribute band,” says Blood on the Tracks’ homepage, and like the saying goes, if you can do it, it ain’t braggin’. The singer sound more Dylanesque than not, but it’s not a cartoon imitation of Bob – it’s more an emulation.

From Chicago, we go to Los Angeles for the Jack of Hearts Band. Specializing in what bandleader Jamie Daniels calls “a quasi-theatrical recreation of the music of Bob Dylan & The Band,” they aim to get the whole experience, right down to the wardrobe. It’s a treat to watch the audience cutaways here; that’s a lot of sustained smiling there.

Highway 61 Revisited calls themselves “The World’s Only Bob Dylan Tribute Band.” That serves as a terrific reminder that above all, this is supposed to be fun, folks. Allmusic says that “[Bandleader Joel] Gilbert and his band present an effective, mildly entertaining facsimile of their hero and his music,” praise so faint that it’s a wonder you can make out the words. When they play live, you can be sure they’re a lot more than mildly entertaining.