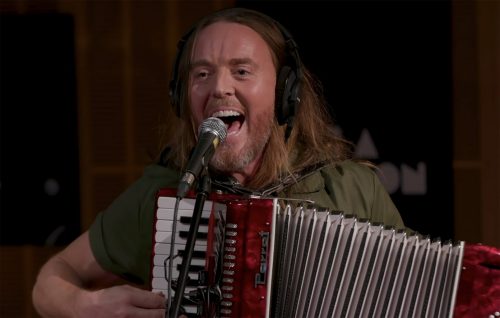 Billie Eilish’s “bad guy” has been covered thousands of times, but rarely in a style as madcap as the new one from musical comedian Tim Minchin. Minchin takes an absurdist magnifying glass to “bad guy,” blowing up the skittish humor already embedded in the song to a cartoonish scale. Synth basses become accordion wheezes; whispery pre-choruses are, apparently, now sea chanties. Minchin and his band, grinning and seemingly on the verge of laughter for the whole performance, throw in a klezmer finale for good measure. The cover is a chockablock one minute and forty-five seconds — a quick, bizarre and wholly welcomed shock.

It was recorded in-studio last week for Triple J’s Like a Version, the long-running Australian radio segment that invites musicians to perform both an original song and a cover on-air. (Like a Version has produced a number of surprising covers that we’ve featured here at Cover Me through the years — among them, Dirty Projectors covering Usher and, in a match of Australia’s finest, The Wiggles vs. Tame Impala).

Check out Tim Minchin’s live cover of Billie Eilish’s “bad guy,” released for Triple J’s Like a Version, below.