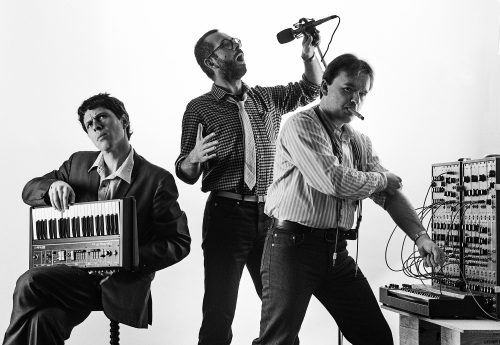 Belgian electro-pop innovators Telex have unearthed a cover of Sonny & Cher’s “The Beat Goes On.” Though Telex officially called it quits in 2008 following the passing of founder Marc Moulin, the cover — re-titled “The Beat Goes On/Off” — is finally seeing the light of day. “The Beat Goes On/Off” is one of two previously unreleased tracks featured on the group’s This Is Telex, a new compilation of Telex music from the seminal electronic label Mute.

Telex recode “The Beat Goes On/Off” with a heavier, deeper pulse. The song’s compact lyrics are transformed into ominous mantras, dispersed amid a maze of roving synths and drum breaks. Though the cover feels dark on the surface, signs of the group’s subversive and humorous approach also charge through. Telex infamously brought their oddball synthesizer act to the garish stage of the 1980 Eurovision Song Contest. (After their appearance was widely misunderstood, the trio later described their entry as a knowing stunt where they “had hoped to finish last”). This spirit jibes with “The Beat Goes On/Off” — beneath the cover’s biting exterior, Telex are having a good time screwing with a goofy pop tune.

Stream This Is Telex here, and check out Telex’s cover of Sonny & Cher’s “The Beat Goes On” below.