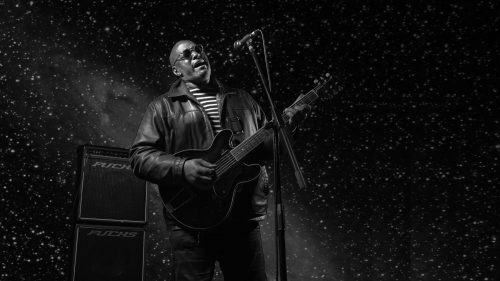 Tomás Doncker has wanted to cover Patti Smith’s “People Have the Power” for years. As the soul singer, songwriter, guitarist, producer, and head of True Groove Records told AM NY, he’s heard the song everywhere from a U2 concert to a YouTube choir as it has become an all-purpose protest anthem. Inspired by last year’s Black Lives Matter protests, he finally gave it a shot – but soon got stymied.

“It was lockdown, so I have nothing but time on my hands,” Doncker told AM NY. “I thought, let me start working on an arrangement. I got the intro and the first verse, but when I got to the second verse, and it so uniquely Patti, it’s almost as if in the studio she stopped writing the song and she just was channeling something. It just comes out of her in her unique voice and language. How does another artist sing that? It’s no longer a proper song, it’s Patti doing Patti. I hit a wall.”

So he put the cover aside, until a chance meeting with Patti’s daughter Jesse, a musician and activist in her own right, at a local pharmacy. She turned out to be a fan of his, as was Patti. So Jesse called up her mom on the spot.

“I completely lost it,” Doncker said. “I’m talking to Patti Smith on FaceTime… I said, ‘Not for nothing, I tried to work on a funk/soul version of ‘People Have The Power’ but that second verse is so uniquely you, did you write that?’ She said that some of it was written and some of it just sort of happened. I told her how I couldn’t make that part work for me, and she said ‘You know what, change the words.’ I said, ‘Excuse me?’ She said, ‘You have my permission, change the words and make it your own. Keep the chorus. It would be good to have another version.’”

So now we do! It’s a hell of a version too, and to think it might never have happened without a chance pharmacy run-in. Check it out below, and read more of the story at AM NY.

Check out more covers of and by Patti Smith here.