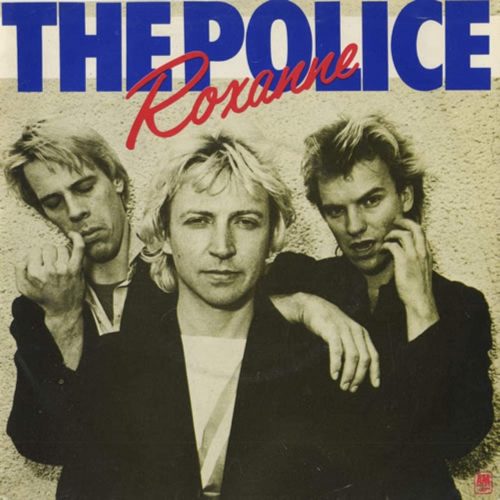 More red lights have been put on (or off, to be fair to the lyric) by “Roxanne” than you might imagine, and in as many shades you can imagine, varying from a lightly tinted rosé to a deep oaky claret. One of the most instantly recognizable songs of the Police canon, surprisingly few of the well over a hundred “Roxanne” covers listed on Secondhand Songs recreate the reggae-lite of the original. Whilst that might seem surprising, it shouldn’t be, as the song, stripped of the staccato chops of Andy Summers’ guitar, has a solid construction that translates well across many styles.

Written by the ebullient bass player, Gordon “Sting” Sumner, as he muscled his way into becoming both the main songwriter and visual focus of the band, it came out ahead of Outlandos D’Amour, their 1978 debut and, astonishingly, bombed. It took the US to take it more to heart. Released there in early 1979, on the back of the initially strong reception by college radio, it climbed to a creditable #32 on the Billboard chart as it crossed over into mainstream acclaim. April ’79 saw it back out in the UK, this time just missing the top ten, peaking at number 12. Said to be based on Sting’s observations around a French hooker observed from their tour hotel, the song was originally devised in bossa nova format, it taking drummer Stewart Copeland to insist on a dash more dancing powder, with it then sped up more to a tango. So much, then, for “white reggae.” But the guitar brings back the trademark Police skank, sufficient for it to be the signature tune of this band, and the song used to open the show at their 30th anniversary reunion tour in 2007.

There are still folk about who are a bit sniffy about George Michael, dismissing his work as lightweight froth. (Indeed, even when his music was froth, it was fine froth, befitting of the grandest cappuccino.) When this opinion is aired in my presence, this is the song, or one of them, that I play. This is just masterful, both the arrangement and the complete and utter control of the vocal. Michael so steals “Roxanne” that it is hard to recall the original, assuming you would even want to.

From his consummate 1999 covers project Songs From the Last Century, it was produced by the legendary Phil Ramone, producer to Sinatra, Bacharach, Aretha, Dylan, the list is endless, always with that same expensive sheen to the sound. Apart from “Roxanne,” U2’s “Miss Sarajevo” and Ewan MacColl’s timeless “The First Time (Ever I Saw Your Face),” the rest of the material was drawn from the great American songbook of show and jazz standards. Michael’s delivery giving a credibility to these three pop songs within that market, as well as alerting his more woke audience to the songs of yesteryear. (Unfortunately, the contractual filler of black tie crooning is a staple now in everyone’s catalog….)

Is this metal? Is this goth? Who cares where you file it; this “Roxanne” is genuinely bloodcurdling, goose bumps down the spine territory. Sturm drangs her banshee wail across the guitar-wracked maelstrom her band set up behind her. The build goes from top to well over, in an entirely good way and incrementally, astonishing leaps and screeches that leave you dripping. Sturm has an astonishing back story, her literature describing the near suicidal teen at breaking point, ahead of finding God, rejecting drugs, alcohol, and her then-girlfriend for a life in hard rock evangelism. Gulp. Be that as it may, this path has not been without success, with her debut album The Scream (an apt title, n’est-ce pas?) becoming the first ever disc by a solo female artist to top the Billboard hard rock album chart, in 2016. Personally, I find this lower key acoustic version even more affecting.

Back into jazzier territory, this ups even the slant offered by George Michael, straying dangerously close to supper club territory. But Garfield, or Creatchy as he is otherwise known, manages to avoid the full parmesan by the beauty of the piano intro, especially the trills that echo the original. True, the arrangement then tries hard to destroy that charm, the walking bass vying with the backing vocals and some extraneous Hammond to defeat the ground gained, but it just about holds, the Miles-lite trumpet solo that leads it out another delight. It is Garfield on the piano, Robbie Wyckoff (whose collaborations range from Roger Waters to Phineas and Ferb) singing, and with Jeff Porcaro, no less, providing the drums. Garfield is an in-demand arranger, I gather, on the periphery of Toto, the band, and a member of jazz-fusioneers Karizma. This project, a more back to basics step, forms part of his “Outside the Box” series, with “Roxanne” coming from 208’s Jazz: Outside the Box.

Sometimes you can have too much sophistication, your soul just crying out for something just a bit more banal and baseless, to let your hair down and shake it all about. I mean, the Police were a punk band, right, so what’s all this tuxedo shit? This is just the trick, a wonderfully trashy take on “Roxanne” maxed up to a far speedier lick, the guitars a scuzzy chainsaw, the bass dropped in from on high, perhaps by meteorite, landing on the quayside with a tremendous clunk. Fall Out Boy, hardcore turned pop-punk band from the Chicago suburbs, caught a wave of success and acclaim in the early noughties, and this track came from a 2006 tribute album, ¡Policia!, a compilation that provides a number of renditions in very much a similar vein, Fall Out Boy being perhaps the best known name. It’s not big or clever, but it’s fun.

Perhaps the oddest “Roxanne” cover here; the links between the music of the Police and traditional English folk are hazy, to say the least. Yet never let it be said that it’s too great a challenge. Here Simon Care, melodeon kingpin of the more overtly folk-reggae hybrid Edward II, brings a whole few new tricks to the game. Banter is one of his many simultaneous side activities, and have been described as the worlds smallest big band. A trio, they combine Care’s pumping squeezeboxes with the jazz and pop inflections of keyboard player, and singer, Nina Zella, and the drums, vocals and brass of Tim Walker. And that was and brass, the two often at the same time, as is demonstrated in this busy mix of styles and sources. Which holds together just dandy. From their 2019 offering, Dare.

One Response to “Five Good Covers: “Roxanne” (The Police)”