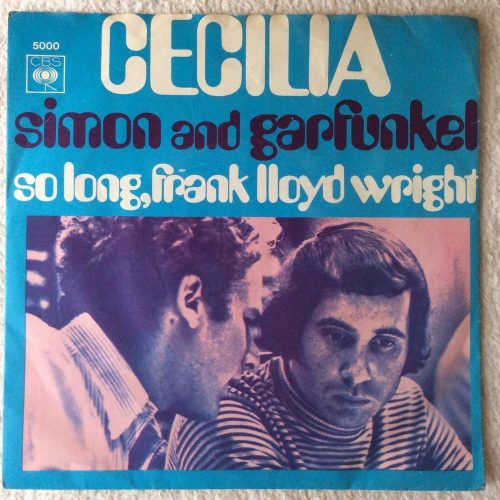 “The whole thing was a piece of fluff,” he later said. “But magical fluff.” Indeed, the song was as sexy as Simon and Garfunkel ever got, and as one biographer later put it, “the song’s thwacking, thumping battery of percussion felt like an ad-hoc group of street-musician drummers pounding away in Central Park.” As Bridge Over Troubled Water‘s third single, the song went top-five in America and remains a classic rock favorite.

“Cecilia” has garnered a lot of covers over the years. Big names from Stan Getz to Smokey Robinson have tried it out, and Suggs of Madness fame took it into the top 10 in the UK. But one need not be famous to make a successful cover of the song – all you have to do is feel it, then let that feeling out. The following five artists definitely do that.

The Local Natives’ performance of “Cecilia,” live from the backyard of their L.A. residence, is one of the most popular “Cecilia” covers on YouTube, and for good reason. It’s not that it captured an indie band so early in their careers, before they went on to some measure of success. No, it’s that it captured the exuberance and creativity of youth so vividly, as they raise their voices and play anything that comes to hand.

Morgan James has a voice that allows her to write her own ticket for what she wants to do. Whether at Juilliard, on Broadway, or with Postmodern Jukebox, her talent has dazzled all who’ve heard it. Here, with a guitar/piano/bass backing, she gives “Cecilia” a new pace, dialing down the euphoria and bringing the song’s power back to its words.

COIN’s cover of “Cecilia” starts off like it’s going to be, if not a sound-alike, at least a sound-similar. But that’s very much not the case; they turn the song into pop-rock, less about the rhythm than the guitar. It doesn’t seem like it should work, so deeply ingrained is the percussion from the original. But it does work, and very well indeed.

Jesse Cook is a guitarist who started off with flamenco and then bloomed from there, picking up strains of samba, jazz, pop, and more. He shows his talents on his cover of “Cecilia,” which also features Paul Simon soundalike Jeremy Fisher on vocals. Together they make the song sound like something from Simon’s vaults, a world music excursion that he somehow never released.

We’ll close with some cuteness. When COVID cancelled Colt Clark’s concerts, he was able to spend more time with his children Cash, Beckett, and Belle. To pass the time, they set out to learn a new song every day, and then make a performance video of it (with wife/mom Aubree serving as cinematographer). Soon they were going viral on a daily basis, with their joyous, rambunctious covers. “Cecilia” is a typical example of how they do what they do. As little pitchers have big ears, they clean up the lyrics a bit, but it only makes them more endearing.