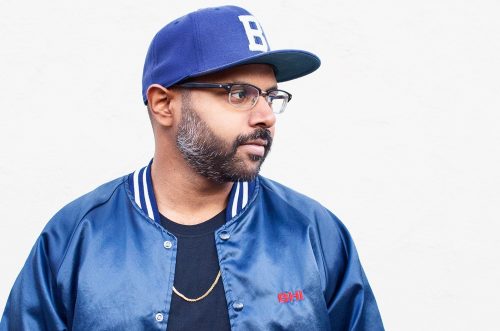 Singer-songwriter, guitarist and producer Bhi Bhiman has released Substitute Preacher II, an offbeat and artful new covers EP that follows the first installment in 2013. In spite of the eight-year gap, Bhiman’s approach to producing covers has stayed remarkably consistent. Substitute Preacher II’s performances mostly feature just Bhiman’s acoustic guitar and mighty vocals, captured in live takes with minimal overdubs. Bhiman saws straight through the trunks of some towering classic rock picks that might at first seem impenetrable to solo-acoustic interpretation: “Back in Black” by AC/DC, Steppenwolf’s “Magic Carpet Ride.” But with the craft of a master carpenter, he also has the foresight and ingenuity to build something novel from the shreds he’s chopped.

This boldness is on display in the finale re-imagining of Frank Sinatra’s “My Way.” (For what it’s worth, “My Way” is itself a cover, of the French ballad “Comme d’habitude,” Anglicized and purpose-built for Sinatra by Paul Anka). Bhiman steadfastly commits to carving out a new musical “Way” from the get-go, cutting out the original wash of orchestration in favor of fresher, purposeful gestures: a single tambourine, an airy Mellotron, exposed acoustic strums. Bhiman’s vocal performance is huge and restorative, with a bravado that feels genuine. Sinatra’s version is perhaps the single most iconic popular song about nostalgia, but Bhiman sculpts “My Way” into a resolute and forward-looking piece, a shrewd and moving paean to creating anew.