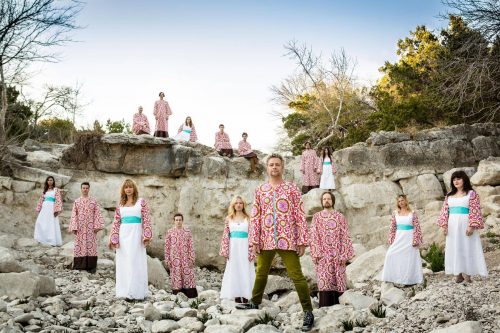 For all their freewheeling tendencies, The Polyphonic Spree have marched forward with an admirable persistence. When the choral art-pop ensemble first made a name for themselves in the mid-‘00s, the group’s massive unison choruses, prismatic visuals, and exultant vibes made them a curious bauble in a sea of jaded indie rock bands. Two decades down the road, The Polyphonic Spree have outlasted many of their iPod Age musical peers, through a stream of global tours, decade-defining needle drops and six studio albums.

The Polyphonic Spree continue to chart a singular course with their new surprise covers LP, Afflatus, released on April 16th. Afflatus was captured live in March 2020 — presumably just before COVID lockdown ensued — in the group’s hometown of Dallas, Texas. The stage-show energy is palpable across a slate of ten covers, ranging from The Association and Barry Manilow to Paul McCartney and Rush. While many of The Polyphonic Spree’s sunniest songs and stage costumes carry complex, near-menacing undertones, the performances here on Afflatus are straight-up fun.

For their take on ABBA’s “The Visitors,” The Polyphonic Spree loosen the slack significantly, transforming the original track’s frosty proto-digital production and taut grooves into a sprawling parade march. Booming low brass, triumphant guitars, a chipper xylophone, and dozens of voices commune for a slice of cathartic rainbow Europop.

Stream Afflatus in full at Bandcamp here, and listen to The Polyphonic Spree’s cover of ABBA’s “The Visitors” below.

Check out many more covers performed by The Polyphonic Spree here.