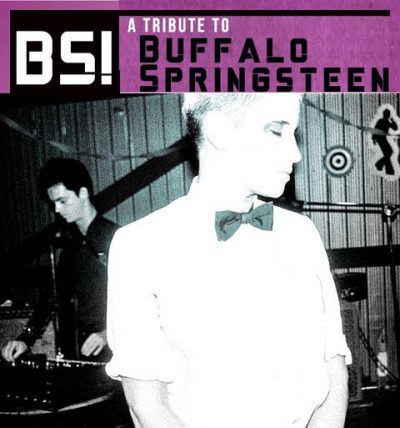 Even the hardcore connoisseurs of cover music may not know the name Billy Bud Frank. Some may know Frank’s stage and recording name, Buffalo Springsteen, whose dizzying run was cut short in 1980 just when BS was poised for stardom. If Frank has been left out of the musical conversation for decades now, it’s not just because his music was ahead of its time. It is more because Frank ended up on the wrong side of what we now call Cancel Culture. But the situation may be about to change, and Frank’s period of exile may be over.

First, the good news: Counter/Fit Records is re-issuing both of the Buffalo Springsteen studio albums, Fool Me Once and Fool Me Once II. The albums have long been out-of-print. Existing copies were literally confiscated from record stores and radio stations, and uploads on digital platforms get copyright takedown orders almost immediately. Each album has become that rarest of things: a rarity. With the re-issues, the censorship finally ends. (Full disclosure: the writer is an employee of Counter/Fit Records and/or one of its subsidiaries.)

But on to the better news, and the whole point of this post: the indie label has also releasing a star-studded tribute album, BS! A Tribute to Buffalo Springsteen. And that’s no BS!

The tribute album is the brainchild of the two surviving members of Nirvana, Krist Novoselic and Dave Grohl, who are credited as executive and consecutive producers on the album. Bassist Krist Novoselic shares an intriguing recollection in the tribute’s liner notes:

When we toured Bleach, Kurt [Cobain] had one prized possession, a battered Buffalo Springsteen bootleg tape. It was all the songs from Fool Me Once with a couple of Bowie covers and a Leadbelly. Kurt played it over and over in the van. Chad [Channing, Nirvana drummer at the time] got so sick of it that he accidentally, quote-unquote, dropped the tape in a puddle of Clorox. I’m not saying that was the reason why Chad had to go, but a few weeks later Dave [Grohl] was in the band.

If this salute doesn’t break the wall of silence around Buffalo Springsteen and Billy Bud Frank, nothing will. Novoselic and Grohl have recruited musical luminaries of all kind to offer fresh takes on a great and misunderstood genius. Grohl, for his part, seems most proud of (and claims credit for) the unlikely pairings of talent. As he told Marc Maron:

My studio was like a freaking particle collider on some of those sessions, where we had to force people to collaborate. I had Björk duet with Billy Joel, and Ozzy [Osbourne] with Dolly Parton. The only reason we got Jim James, James Taylor, and Taylor Swift to do “Fake It Till You Make It” is that we told [Jim] James that it was a John Prine tribute, and we told Taylor [Swift] that Dolly might be there.

The big names are a big deal, yes, but the younger artists steal the show. This tribute may introduce a mainstream audience to rising stars like Sharon Needles, who uses animals rigged with sensors and controllers to generate beats (PETA has threatened legal action), and punk-rap chanteuse Carrie Boltcutters (recently banned on YouTube, coincidently, for a much different issue with animals). Even the singing siblings known as Neiderman (Soupy and Silky Neiderman) may have a hit on their hands with BS’s “Fool Me Twice.” The duo pulled off a coup by getting Novoselic and Grohl to join them on bass and drums; unfortunately it was Novoselic on drums and Grohl on bass, with uneven results. If the Neidermans are siblings as they claim, their relationship is an unusually close one, judging by their TikTok channel.

A pre-album single is already out now, and it’s the Björk/Joel collaboration, “Fool Me Once.” Joel fans will appreciate the piano man’s vocal, but when Björk joins in on the chorus some of them will have a heart attack-ack-ack-ack-ack-ack. Don’t sleep on the follow-up single, the Fleet Foxes with Greta Van Fleet doing “Cat Scratch Stevens.” (Sorry guys, Treepeople still have the definitive version of this song.) The original ends memorably in howling feedback, and so does the cover, although the feedback in this case is not from amps but from singer Robin Pecknold. “You’re all out of tune, dumbasses” he screams. “That was a crap solo.” These and other (inebriated?) remarks could have and should have been edited out. An attempt to court controversy, perhaps.

Best track of all? It might be from relative unknown Syd Seizure. They turn BS’s semi-tender ballad “Watch Me (Put a Rabbit Into My Hat)” into a sort of dirge, with assist from the Daughters of Tuva folk ensemble. The Daughters deploy such Tuvan vocal sub-styles as borbangnadyr, chylandyk, dumchuktaar, ezengileer and kanzyp (if Novoselic’s liner notes are accurate). Grohl insists that the dumchuktaar sections were captured live in the studio with no overdubs— dumbfounding indeed!

Is BS now primed to capture the imagination of the general public? Not a chance. The muzzling of Billy Bud Frank had to do with some famously shameful behavior on his part in 1980, and once people are reminded of the incident(s), the knives will come out, freshly sharpened. In today’s climate of virtue signaling and Insta-judging, it’s hard to imagine a big warm mainstream embrace for Frank, no matter how well the tribute album or the reissues sell. Frank will always be an outsider, and he’d have it no other way.

Happy April Fool’s Day, everyone. Hope we fooled you for a minute.