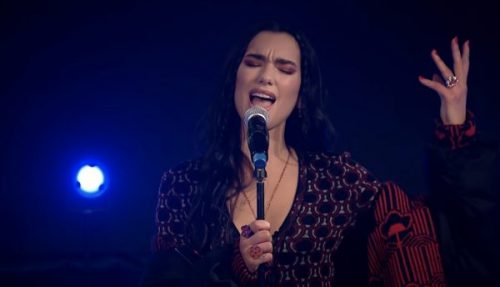 Dua Lipa’s music has been omnipresent this year. Her Grammy-winning album Future Nostalgia, released last spring, became the soundtrack for a global audience’s new virtual reality. The record is cavalcade of glossy dance pop and a surprisingly transporting at-home listen, offering a fantasy facsimile of a night on the dance floor.

Still, nothing compares to sharing music in-person and communing in the same room, even if it’s socially distanced. For her live take on Arlo Parks’ “Eugene,” Dua Lipa and a modest ensemble find joys in the song’s small gestures and resonant core. The cover features a single pared-back guitar, occasional plumes of electric bass and four voices: Lipa on lead, plus a trio of backing singers (Matt Maijah, Ciara O’Connor and Naomi Scarlett). The vocalists revel together in the song’s final delicate harmonies, distilling a concentrate from Parks’ sweet tune. While the spare sounds are a far cry from Future Nostalgia’s mighty club energy, Dua Lipa’s “Eugene” is no less striking — and certainly as intoxicating.