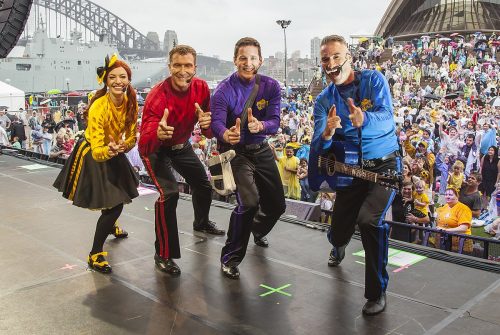 Something you didn’t know you needed is a Wiggles cover of Tame Impala. If you’re not already familiar, the Wiggles are an Australian children’s music group. Before you click away, hear me out. This past week, they covered Tame Impala’s “Elephant” for Triple J’s Like A Version, along with a performance of their song “Fruit Salad.” As on YouTube commenter put it, “If this doesn’t make the hottest 100 then someone is wrong with this country [Australia].”

The current Wiggle lineup is Anthony Field, Lachlan Gillespie, Simon Pryce, and Emma Watkins. For the Triple J performance, founding members Murray Cook and Jeff Fatt made a temporary return to the band. Their cover retains the psychedelic groove that makes Tame Impala songs notable. And their performance is very much improved by Anthony wearing an elephant costume.

“The Wiggles love animals and we chose [this song] because we like elephants,” Emma said in an interview with Triple J. “We’ve had a great time learning it because it is so different than what we would normally play. If you look closely in the video, I’ve got a whole sheet of notes on the drum because I needed it … We don’t normally play songs that complex.”

Despite the challenges, The Wiggles produced a cover full of distorted guitar and lyrics clearer than the original. The vocals are lowered into a deep velvety baritone adding another level of dimension to the tune. The song also meshes surprisingly well with The Wiggles tune “Fruit Salad,” because how else do you make a song seem more “Wiggle-y” than add the phrase “fruit salad” in the middle of the song.

Both Tame Impala and Wiggles fans – two very different fanbases – can come together on this cover. Says another delightful YouTube commenter Magnus Casaubon, “I showed this to my 3-year-old son, and he was paralyzed with confusion. But then Simon Says Fruit Salad, and he starts smiling.”

For a more classic cover of “Elephant” check out the Flaming Lips’ 2011 performance.