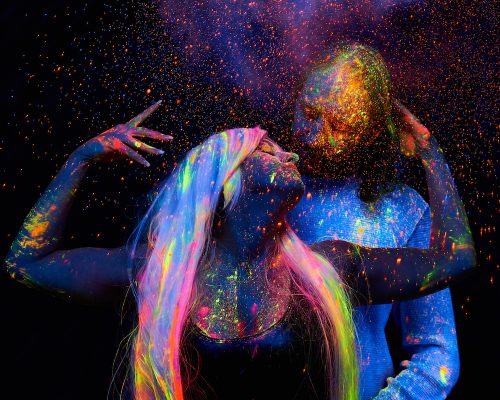 There are few songs so closely tied the psychedelic era as Jefferson Airplane’s “White Rabbit.” Though only a Top 10 hit in the US (and only a Top 100 hit in the UK!) the song is now movie code for psychedelic drug use and captures so much of what the popular imagination feels the late ’60s was like. And that makes sense, with its Alice in Wonderland-inspired lyrics and the Bolero-in-miniature structure, it sounds like something weird is going on.

Two artists, The Simple Radicals and Che-Val, have combined to create a 21st century take on this iconic song, one that brings it out of the past and the extremely strong association with hippies and drugs. The Simple Radicals are a self-described “retro rock band” from Chicago and not the kind of group you’d imagine making electronic pop music. It’s a little more in the wheelhouse of the indie synth pop duo Che-Val (pictured above) who joins them on the track.

From the start, the vibe is entirely different and very 21st century. Though Che-Val lead singer Laura Cash mostly keeps the vocal melody, everything else is changed. he song opens with some feedback, the tempo seems to sway and bubbling synths underlie her vocal. There’s almost a celebratory feeling when Cash begins singing the climax of the song. That dissipates soon, though, as the creepy vibe of the beginning of the song returns. Then there’s a new coda that extends the song and seems to change the intent of the lyrics.

It’s a bold reinvention that sounds almost completely different from the original, save Cash’s vocal. Check it out below: