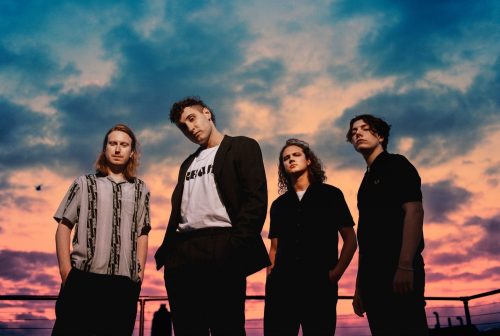 Sea Girls is an indie rock band based out of London. In between the release of their sophomore album Open Up Your Head in August 2020, and their upcoming European tour in October, they just released a new cover of “Nothing Breaks Like a Heart.” It brings a slightly darker tone when compared to Mark Ronson and Miley Cyrus’ track, as Sea Girls’ alternative-sounds rubs off onto the cover. The different tone is almost unnoticeable at first with singer Henry Camamile’s falsetto and the same stringed arrangement opening the tune. But the weight of the tone grows and thickens as the song progresses, almost as if Sea Girls grew bolder as their comfort grew as they molded someone else’s art.

“The first time I heard [Nothing Breaks Like a Heart] was when we were on our tour bus driving through Belgium in the middle of the night to play a festival in Germany the next day,” said Camamile. “I couldn’t stop playing it for the next 24 hours. It just sounds like a classic. The lyrics are just infectious. ‘We live and die by pretty lies’ tells a great story; you know? We’re really proud of how it’s turned out and hopefully, I’ve done Miley justice in the vocal delivery.”

The indie-grunge sound of Sea Girls is best showcased in the instrumental backing of the tune. Oli Khan plays to his talents because the drums, in particular, mold the piece to sound less like a pop sensation and more like something grittier. The bass line played by Andrew Dawson pushes through from the chorus into the verse and it makes a powerful impact on the gritty tone of the song. Rory Young on lead guitar creates dizzying rifts pushing the energy of the song up a notch. Camamile has a distinctive voice, but rather than 100% competing with the vocal powerhouse that is Miley Cyrus, the chorus has a layering effect in the vocals that make them stand out in a different way.

Sea Girls’ discography contrasts bass-fueled lows Camamile’s naturally deeper vocals, with the falsetto and flashy highs in the chorus. This technique is used in the “Nothing Breaks Like a Heart” cover, but in a less extreme fashion. The lessening of this effect lends itself more to the sounds of a glistening pop-tune, but Sea Girls shifts it into a slightly different, slightly heavier story.

Another cover of “Nothing Breaks Like a Heart” made it in the number 32 spot of Cover Me’s “Best Cover Songs of 2019.” Composed by Wandering Hearts, another London-based band, decided to take a folksier twist on the tune. And Sea Girl’s more alternative cover is featured on “The Best Cover Songs of February 2021” along with some other excellent covers songs.