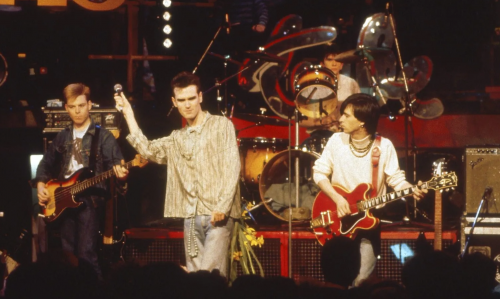 A sentence that begins “If you like ‘How Soon is Now’ then you will also like…” is a sentence that will not end well. It sets itself up for failure because the song has no real counterpart, no next of kin—not within the Smiths’ catalog, and not within any music collection anywhere. The song’s uniqueness gives cover artists an uphill climb. Maybe this explains why the world is not exactly swamped with “How Soon is Now” renditions that are worth repeating. But we did find a few exceptions, and we will now look at three of them. Or we will soon.

Even the Smiths themselves shied away from “How Soon Is Now.” Its searing and pulsating guitar tracks were studio confections, and the band could not do the song justice in a live setting. They tried. It took the guitarist Johnny Marr and company a lot of studio time, gear, weed, and experimentation to build-up and shape those sounds. I read all about it so that you wouldn’t have to, and it boils down to this: they just kept twisting knobs and switching switches until they reached perfection. (Also, they replaced the studio’s normal lightbulbs with red lightbulbs—that part seems crucial.) But the question this leads to is this: How does your average cover artist deal with all that exquisite richness of sound? We can answer that question right now. And we will soon, in a minute.

As with any song that’s in a class by itself, it’s hard to identify what its composers were listening to that led them to create it. The guitar-besotted production traces back to Led Zeppelin or Creedence Clearwater Revival in some ways, but the song is more strongly imbued with disco and dance club culture, the sound of places like Danceteria in Manhattan and the Haçienda in Manchester, where Marr and Morrissey were hanging out. Now add the band’s pop sensibility, Morrissey’s voice, and his acidic lyrics. Result: A unicorn of a song.

It’s no wonder that the Smiths’ label didn’t know what to do with this oddity. The label relegated the song to a B-side at first, like an after-thought, or filler. “William, It Was Really Nothing” sold well enough as the A-side, but it had none of the originality of its flip side. It took time, but “How Soon is Now” eventually proved way more popular. Listeners just had to find it. And people always find these things, if belatedly. The song joins other big hits that began life as a B-side, like Booker T & the M.G.’s “Green Onions,” Rod Stewart’s “Maggie May,” Queen’s “We Will Rock You,” and Green Day’s “Good Riddance (Time of Your Life).”

When Marr first worked on “How Soon is Now,” he meant to create something as distinctive as “Layla.” He achieved the goal, and without playing anything the least bit Clapton-esque. “Layla” was an interesting model: though it is now considered iconic, the song was a commercial and critical fail at first. “Layla” and “How Soon Is Now” have that slow start in common, and longevity too. Both songs still sound fresh, though several decades old. Some songs attract immediate attention but quickly fade away; others take time to soak in, but become indelible once they do.

While not for everyone, this may be the most 21st century-sounding cover of “How Soon is Now” yet recorded. Morrissey has spoken favorably of t.A.T.u.’s version, so don’t fight it, just go with it.

It’s from the debut album by the Russian recording duo, who released this remake as their fourth single in 2003. The high-pitched vocalists may invade the shrill zone in some moments, but it works for me and a few million others. There’s not much to engage with on the instrumental level, but the singing makes up for it.

t.A.T.u. always courted controversy with their political outspokenness, their queerness or lack thereof, and with transgressions real, imagined, and staged. (This was all part of the charm for Morrissey, perhaps.) The band’s outspokenness against US-led wars in the Middle East likely had something to do with the single not being released in the US (remember the Dixie Chicks getting canceled in 2003?). The single sold very well regardless.

With soulful vocals and a funk-oriented band, Haley’s cover has originality on its side. The singer and guitarist keeps a safe distance from the source—which is to say he let his own instincts be the guide and isn’t imitative. You can’t easily pin down Haley in terms of style. In this rendition you get a trace of reggae influence, but not in any obvious or cliched way. As with the Smiths’ original, there’s no easy container or frame for what it is you are listening to, or clear-cut antecedent. Haley’s approach is the opposite of formulaic.

Other covers from Haley are as tasty. Try his 2007 take on “Walking on the Moon” by The Police; it helped the singer-songwriter place 2nd in America’s Got Talent. His original material is popular as well.

Yes the Raven–How Soon is Now (The Smiths cover)

For Smiths fans who love the hard-hitting intensity of the original, this cover might go about things the wrong way. An unplugged acoustic guitar, a subdued and inwardly-directed vocal—admittedly, it doesn’t seem promising. But skeptics should  gently open their minds to this interpretation.

Irish singer-songwriter Alan Mearns (a.k.a. Yes the Raven) is no ordinary guitarist or song interpreter. We’ve looked at his work before, for his redo of Nirvana’s “Come As You Are.” Although Mearns is all about nuance and quietude, whatever is heavy and intense about the original “How Soon Is Now” gets reproduced here, albeit in filtered form. Mearns gets a hypnotically rolling bass line going, and sustains it throughout while adding textures and solo passages on top. He doesn’t shred (guess they don’t teach shredding in classical guitar class), but that lets us focus on the emotion. The counter-melody line under the chorus is a thing of beauty, a lyrical new addition to the song.

If the t.A.T.u version is all mindless raving fun, this version works the mindful and broody side of the street. Sometimes (not always) that’s where you find the best musicianship and creativity.

Mearns kicked 2021 into gear by releasing an entire album of U2 covers (it dropped on New Year’s Day, of course) and an album of originals. You might find his reworkings of Radiohead, Joy Division, REM, and others are well worth investigating too.

Honorable mention: Janice Whaley. So much Smiths! So many voices–and all of them Janice’s! Listen to her music here. Read our notice about her special Smiths box set here. Enjoy!