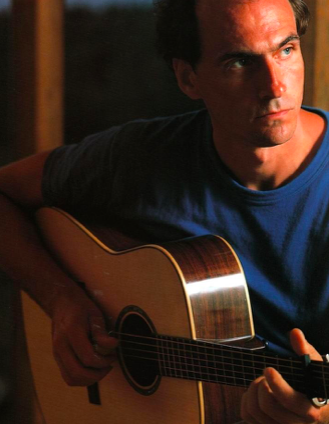 James Taylor’s 1979 album Flag was regarded as something of a letdown. While its mega-selling predecessor JT, was home to radio friendly romantic candy like “Your Smiling Face” and “Handyman,” Flag was a far less embraceable animal, home to only one “hit,” a slick and shiny cover of old chestnut “Up On The Roof.” Rolling Stone went so far as to compare it to the austere art of Andrew Wyeth. While it was a mixed bag in terms of overall quality, it featured two positively stellar originals. The first was “Millworker,” the story of a widowed woman working in a textile mill in the 1800’s with “three faces to feed” trying her best to daydream the daily grind away.

Bette Midler did a pretty sweet version of the song in 1979, but Emmylou Harris’s 1981 version noses it out for the best “Millworker” cover. The handsome arrangement, country-flavored authenticity, and gorgeous clarity of the Harris voice get right to the heart of the song. It’s a beauty.

“Sleep Come Free Me” is Flag’s other classic deep cut, and it’s one of the darkest, most oddly insightful songs JT has ever written. As such, it is a ridiculously inspired cover choice. With pronouns intact, Annabel Fay serves up an exquisitely impassioned vocal and is completely convincing in the role of convicted murderer (with a tire iron, no less) who craves the freedom that only sleep can bring.

Javier Colon, 2011 winner of TV’s The Voice, loves James Taylor, speaks of him often, and has offered up some pretty sweet covers of his self-proclaimed idol’s songs over the years. He’s no casual fan either, as evidenced by this cover of one of the underrated sleepers within the JT catalogue, 1988’s “Never Die Young.” While the song was released as a single, it didn’t set the U.S. pop charts alight, ironically only getting as high as # 88. It remains a favorite amongst the hardcores, though, as well as James himself, who describes it as “a pretty sad song.” Watch in awe as Javier expertly transcends the drab record company office space he’s been forced to perform in and effortlessly fills it with soaring soulful beauty.

Nothing Like a Hundred Miles – Jim Hurst (James Taylor cover)

“Nothing Like A Hundred Miles”, the superbly melodic 1976 deep cut and heartbreak anthem, has been tackled a few times over the years, most notably by Ray Charles and B.B. King in 1988. Unfortunately, despite their own fine performances, the painfully slick and mechanical production on that recording obliterates what made the original so great; its beauteous, dusty and homespun arrangement. I had no idea who Jim Hurst was when I first stumbled upon his cover a few years ago, but I was instantly charmed by the bluegrass flavor he imbued in it and how perfectly it suited the sound and structure of the song. There’s a genuine Vince Gill vibe to the whole thing, and its unassuming sweetness makes you crave even more countrified swings at the deeper JT catalogue.

Hey Mister, That’s Me Up On The Jukebox – Linda Ronstadt (James Taylor cover)

There are some pretty fine covers living on Linda Ronstadt’s #1 album from 1975, Prisoner in Disguise, the best known being her rockin’ megahit take on Martha and the Vandellas “Heatwave.” The autobiographical lyrics of 1971’s sardonic lament “Hey Mister…” sound just as convincing from Linda as they do from JT, but their respective vocal presentations couldn’t be more different. While the Taylor delivery is the very definition of laidback and world-weary, the Ronstadt vocal is forthright and often downright booming (even at her most subdued, that Ronstadt voice is huge). Over a handsome, mournfully twanging backdrop, she comes dangerously close to taking complete ownership of the song.

If you are a hardcore JT fan, you are no doubt familiar with the vocal stylings of David Lasley. Along with Arnold McCuller, Lasley has sung backup for JT on albums and tours dating back to the late ’70s. He’s also found time to kick a few exceptional studio albums of his own, the first of which, 1982’s Missin’ Twenty Grand, is filled end to end with truly lustrous West Coast style pop-soul and showcases Lasley’s otherworldly falsetto to perfection. One of the LP’s highlights is its cover of the lonely and hopeful “Looking For Love On Broadway,” a deep cut off 1977’s multi-platinum JT album. Lasley eschews the sweet shuffle of the the original JT version, slowing the tempo and reshaping the song into a rainy, gospel-ish ballad. That proves to be the ideal setting for him to bring it on home with his immense, glorious voice.

Enough to Be On Your Way – Cris Williamson (James Taylor cover)

Cris Williamson is a bit of a legend in the world of both folk-rock and the LGBTQIA community, releasing roughly 30 albums in her 50-year career and launching legendary label Olivia Records in 1973. She’s tackled a few JT songs over the years, including “Millworker” and “Shower The People.” But her version of “Enough To Be On Your Way,” JT’s evocative and handsome elegy to his late brother Alex, is her finest cover from the catalogue. She forgoes the rustic vibe of the original, opting for a fat, fleshed-out piano-led arrangement, and serves up a perfectly melancholy, heartfelt and widescreen vocal.

2 Responses to “Off The Beaten Path: James Taylor”