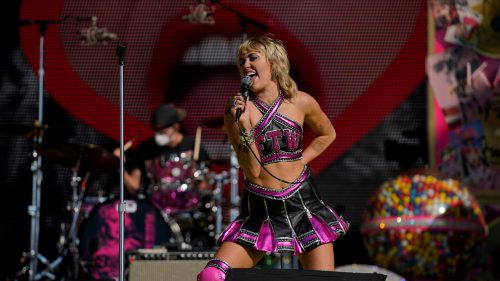 Last week Miley Cyrus continued her epic run of recent covers during her pre-game performance at this year’s Super Bowl. Along with a cover of “Heart of Glass” by Blondie (which we previously covered here), Miley also performed a modified version of “Mickey” by Toni Basil, “Head Like A Hole” by Nine Inch Nails and “Rebel Girl” by Bikini Kill. Her versions of “I Hate Myself for Loving You” by Joan Jett and the Blackhearts and “White Wedding” by Billy Idol, featured special appearances by their original singers, to the delight of the crowd.

The adaption of “Mickey” into “Miley” to get the crowd pumped up was a great move, and while Billy Idol does a great job with his big hit, the best song of the lot was the duet with Joan Jett. Miley has always been a powerful woman, which has always been best expressed through strong, hard punk rock, which was on full show with this performance. Indeed, Cyrus even indicated her love for Joan Jett, indicating that the track was performed to make sure people think about strong women, even during a very ‘guy’ day like the Super Bowl.

Watch the whole show below, which includes all of the covers mentioned here and Miley performing songs from her new album. See the time stamps for the covers below.