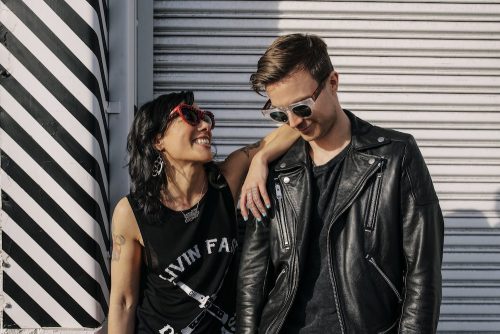 Matt and Kim didn’t plan on covering I Monster’s “The Blue Wrath.” So why did they? To fix an Instagram video they had posted with the original version of the song. That first video was removed, after getting caught up in the social media copyright monitoring systems. So Matt and Kim created a cover to use when they reposted the video. In the post, they say, “Insta took this video down before because of a copyright claim on the song, so I figured ima ‘musician…’ I’m stuck at home… I’ll make a cover of it and put it back up! Don’t try me!”

You may recognize the song “The Blue Wrath” as the opening theme song from the film Shaun of the Dead, played over humans in a zombie-like state just going through the motions of their dreary unvarying lives. Matt and Kim’s video sees them marching all around the streets of their home in Northeast Los Angeles. Although the electric indie duo made the song slightly more sharp and electric sounding, giving each synth its time in the spotlight, the cover is similar to the original song. Typically a good cover is judged on its ability to traverse styles, but for this purpose – to act as a legally-copacetic replacement for the original – we can give it a pass.