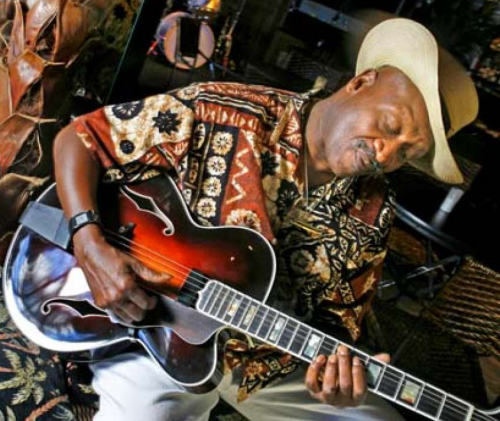 His artistic longevity is all the more impressive because Taj has never had the chart-topping hit, or a cultish following, or the other advantages that make it easier for a performer to sustain a career. Yet here he is, almost 80, still throwing down, resonating with a new crop of musicians.

Born Henry Saint Clair Fredericks Jr., Taj had advantages of his own, like musically-gifted parents. His father played jazz, his mother sang gospel, and they welcomed African, American, and Afro-Caribbean musicians into their home. No wonder Taj is skilled at so many instruments and is adept at just about every musical form that the African diaspora gave rise to.

To characterize Taj Mahal as a “blues musician” is to overlook his pioneering role in world music. With his blues-infused forays into Latin, reggae, Caribbean, calypso, cajun, and jazz music, Taj explores the musical DNA that unites Mali, Jamaica, Trinidad, the south side of Chicago, and the hollows of Appalachia. His playing field isn’t strictly afro-centric, as his collaborations with Indian and Hawaiian musicians reveal. His talents as actor and film score composer are worth noting as well.

Taj’s career began in earnest in 1964, when he moved from Massachusetts to Los Angeles. He worked with some some of the previous generation of bluesmen–Howlin’ Wolf, for one–but things really took off when Taj partnered with a local teenager named Ry Cooder. Soon after that he joined forces with the Native American guitarist and pianist Jesse Ed Davis.

Those early Taj Mahal projects stand out on several counts. The multi-racial dimension was new: integrated bands were basically unknown in the folk and rock world when Mahal and Cooder formed Rising Sons in 1964. (In jazz, black and white musicians played together as early as the Swing era.) Another innovation was his marriage of electric music with acoustic: Taj’s 1968 Giant Steps double album paired an electric LP (Taj with band) with an unplugged disc (Taj solo). The bridging of the acoustic/electric divide, and the joining of original material with revamped covers of music from the 1920s and 30s, set a direction that other west coast bands like Hot Tuna and the Grateful Dead would run with.

Also notable about early Taj Mahal records: their outsized influence. The Allman Brothers Band ate up Taj’s arrangement of “Statesboro Blues” (they didn’t know it was an old Blind Willie McTell song , heavily remodeled). The ABB version of the song became the definitive one; most listeners assume it’s their original. Duane Allman was so taken with the slide guitar playing on Taj’s version (the work of Jesse Ed Davis) that he took up the slide himself. (That’s right: a defining sound of Southern rock owes a good deal to Mahal and Davis.) Taj and company also impressed the Rolling Stones, who saw his shows at L.A.’s Whiskey A Go Go and flew the whole band to London. There, they performed at the ill-fated Rock and Roll Circus of 1968. Had that show been broadcast as planned, and not shelved for decades, Taj’s career may have had a different trajectory.

Official industry recognition had to wait. Not until the 1990s, 20 albums deep into his career, did Taj win a Grammy award. He won a third Grammy in 2017 for his collaboration with Keb’ Mo.’ At some point came Lifetime Achievement awards and honorary doctorates. And who knows what the future holds: Taj’s website lists some concert appearances this coming June—let’s hope the vaccine roll-out gets into gear to let live shows happen again. “The people are as much a part of the performance as the music,” Taj has stated. “Live communication through music, oh yeah, it’s right up there with oxygen!”

Taj probably found the original “Fishin’ Blues” on the Folkways Anthology of American Folk Music. The thing about Taj’s interpretation of this song from the 1920s is how much more ancient his cover sounds than the original. Maybe it’s the tinny sound of the steel resonator guitar that causes the illusion; maybe it’s the way Taj relaxes the tempo to a pace that seems in sync with simpler times.  Other performers of his generation had their treatments of “Fishin Blues” before Taj got around to his, but for my money they fall far short of Taj’s unique artistry.

Megan and Rebecca Lovell of Larkin Poe are generations younger than Taj, but their soulful chops and big hearts prove they are his kindred spirits. In fact, their take on Taj’s “Lovin’ in My Baby’s Eyes” composition would have fit nicely on Kindred Spirits, their 2020 covers album.

The original is from Taj’s Phantom Blues record (1996). That album felt like a triumphant return, since the eighties had left Taj without a recording contract (a move to Hawaii furthered his retreat from the scene). But part of its charm is the way “Lovin’ in My Baby’s Eyes” could have been plucked off one of his earliest recordings. It wasn’t Taj stretching for new dimensions as much as relaxing back into his established groove.

The somewhat-twisted folkie Sam Amidon (“twisted” in the good way) included a Taj Mahal original, “Light Rain Blues,” on his self-titled fifth album (released late in 2020). Amidon even stated it’s his favorite track on the album. The track reveals two truths about multi-instrumentalist Amidon: he is serious about folk tradition, and he’s equally serious about experimentation. He has collaborated with avant-garde jazz drummer Milford Graves, the mercurial Bill Frisell, and “folktronica” artist Beth Orton (whom Amidon is married to). Amidon’s take on the song is faithful to the original, except he adds indistinct atmospheric sounds (well, the helicopter blades are pretty distinct). He keeps the sonic experimentation in check, though, adding just a pinch of it to lend a contemporary flavor to Taj’s old gem.

You can find in-depth articles tracing the long history of “Catfish Blues” and its more interesting variants (like “Rollin’ Stone,” from which a certain band and certain magazine each took their name). But none will trace it back quite as far as Taj does here, with the West African luminary Toumani Diabaté. The jangling twang of Diabaté’s kora, the harp-like African instrument, puts you in Timbuktu one moment, the Mississippi delta the next, as if entertaining the idea that the song’s ultimate roots go back to Mali.

The first song on the first Taj Mahal album was “Leaving Trunk,” a heavily revamped take on a Sleepy John Estes number from 1930. The Tedeschi Trucks Band and The Derek Trucks Band have both recorded live versions in recent years based on Taj’s arrangement. Perhaps they are giving a nod to the connection Taj had with the original line-up of the Allman Brothers Band (Derek Trucks being a member of the band since 1999, and the nephew of the band’s original drummer Butch Trucks). In this particular rendition, the artists are rehearsing before a show, loosely working out kinks. It’s a nice behind-the-scenes look at old pros and younger pros–good friends all–playing blues with a feeling.

Taj Mahal–It Takes a Lot to Laugh, It Takes a Train to Cry (Bob Dylan cover)

Not so many of Taj’s generation are still going strong, but his friend Bob Dylan (a year older than Taj) seems to be doing pretty well for himself. The new material Dylan released last year felt like a return to songwriting form for the Nobel prize winner. Here we have Taj doing a bluesy Dylan number from 1965; the track leads off the 1999 Tangled Up in Blues tribute to Dylan put out by the House of Blues label. Lyrically, the song mixes now-famous Dylan lines (Steely Dan lifted “can’t buy a thrill” for an album title) with old tropes patched in from various vintage country blues. Taj plays it fairly straight, but with plenty of funk in the shuffle, courtesy of his Phantom Blues band partners.

One Response to “In the Spotlight: Taj Mahal”