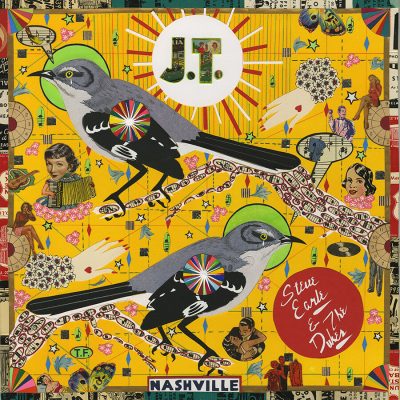 So, where to start? Father buries son, the two both acclaimed artists, both arguably difficult to love as people and who seemingly found it hard to love each other, both riddled with demons and overly familiar with self-medication. Too much cliché there, I fear, the sort that leads to declarations of relief that the son’s OD was accidental. Like that helps anyone.

So let’s start with the barer facts. Justin Townes Earle was a mighty fine songwriter. His father, Steve, still is. Earle Sr. has only made three covers albums, this the third, all tributes. The first two, Townes (Van Zandt) and Guy (Clark), are dedicated to his two greatest influences, who both happened also to be friends and mentors of his and of each other. Check out their live joint benefit album Together at the Bluebird Cafe for proof of that. No coincidence in how he named his firstborn. My sort of clumsy point is that Earle doesn’t pay tribute lightly: you gotta be pretty damn good at your trade to get his nod. J.T. was pretty damn good, and J.T., Steve Earle’s tribute to him (released on what would have been his 39th birthday), is all the proof of that you need.

So what does J.T. sound like? Or, are you asking, who does J.T. sound like? Silly question really, as Steve Earle can really only ever sound like Steve Earle and he always does, whatever the genre he is tapping, from plain ol’ ornery country tinged rock, through folk, bluegrass, even rap. For this record, this is Earle and the Dukes playing to their strengths: a solidly hewed chunk of classic Americana, the instrumentation brimming with fiddles, steel, dobro and acoustica, never forgetting the 4:4 backbeat of bass (often stand-up) and drums. Rollicking opener “I Don’t Care” breaks the seal and declares the intent, needing scarcely two minutes to broach that this is a celebration of his life. A wake, no funereal lamentations here. Almost.

“Ain’t Glad I’m Leaving” further underpins this mood, a country gospel holler, the lyric wryly ironic. It is no mistake that Nashville appears writ large on the sleeve. The broad church of that modern city comes next to the fore, with the almost Costello-esque interpretation of “Maria,” still with enough mandolin and steel to belie the source.

“Far Away in Another Town” could have sounded maudlin in other hands. Here, the delivery eschews sentiment in favor of a high lonesome reality, the church organ a bleak reminder of why we’re here. But with only this short moment to reflect, a rollick through “They Killed John Henry” keeps you from weeping too much into your whiskey, if those tears might then break through again for the mournful “Turn Out My Lights,” another song that has you questioning the prescience of the words.

More of that wonder/terror, as “Lone Pine Hill” exhorts for the author to be taken there, to his home, the songs all fitting together in an overall assessment of a mind weighed with worries.

Perhaps the simplest song, “Champagne Corolla,” follows, a palate-cleansing rocker that kicks dirt over any risk of sentiment, ahead of the bitter sweet “Saint of Lost Causes,” splicing again the portentousness of words, giving faith to the bizarre notion, nonsensical even, that these songs were crafted with this very moment in mind.

It had to be “Harlem River Blues” that closes J.T., possibly the best known of J.T’s legacy. It’s textbook Earle (either one), the Dukes really pulling it out, the build of chorale vocals building as the instrumentation ceases a masterful way to finish.

But it isn’t the end. A final song emerges, this one a new song: “Last Words,” a heart-wrenching lament from father to son. Listen and weep, the lyrics a keening blade of jagged love. We here aren’t in the business of promoting originals, but hell, if ever were there an exception needed, here it is.

J.T. is a wonderful piece of work, a tribute fitting, heartfelt and true. Taking a moment to skirt around the genesis of this record, this is also a first-class Steve Earle record, as folk begin to search for “returns to form,” the lot of any mature artist with a body of work extending into dozens. To my ears this is his best since 1997’s El Corazon.

You may have noticed I have made little or no mention of Justin Townes Earle’s original versions of these songs. By and large they tend to be more stripped back, bleaker and more desolate, the mood being more of an old testament prophet, his father thus bearing appropriate witness, a John the Revelator. My immediate response to this release was to make a playlist of the same songs, in the same order, as played by Justin, slotting it alongside the disc here. (And please, should you do this too. Buy the songs; he has a wife and family.)