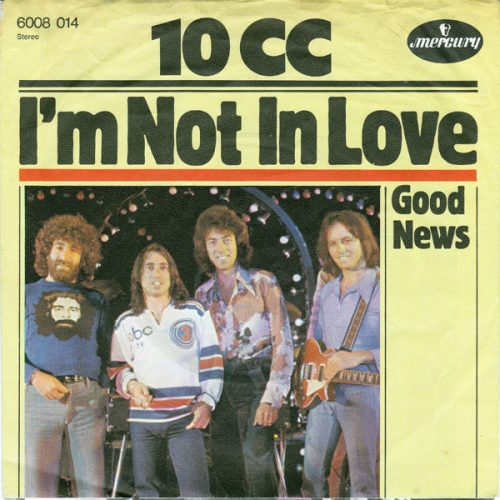 With that, voila: a classic was born. The song enjoyed massive success in the most prestigious pop charts, hitting #1 in the UK pop charts and #2 in the U.S in 1975.

“I’m Not In Love” is weird. It’s like a reversible shirt of a song (do they still make those?). While it was written as a clever, playful declaration of adoration, it can also be read as a cruel dismissal, depending on where your head is at when you hear it. Which is part of its unending genius and why it sits so comfortably next to The Police’s famously misinterpreted anthem of bitterness “Every Breath You Take” in those unsuspecting love-themed playlists. “I’m Not In Love” is technically in love, but there’s an oddly cruel edge and mournful spirit inside of it that allows it to shape-shift and take on the guise of perverse interloper amongst the sweet lambs. On the one hand it’s a loved-up hymn of true devotion, but flip that emotional card over and you’ll hear a painful, pitiless wake-up call.

Lol Creme says it’s “the best track I have ever had the pleasure of being involved with. You look up to the gods and say thank you when something like that comes in from the speakers.”

In turn, allow us mortals to look up to 10cc themselves and say thank you for delivering this lustrous, otherworldly pop song to humanity.

There have been roughly a trillion covers of “I’m Not In Love” by everyone from Peggy Lee (sadly, not good) to The Pretenders (okay) to Queen Latifah (also okay), but there is something ineffably special about these five versions that makes them stand out from the crowd. Welcome to the coolest, sweetest and most utterly transcendent “loves” around.

When it comes to matching the ethereal power of the original version of  “I’m Not In Love,” a cover can only get but so close. And no one on the planet has come closer than esoteric alt-dreamer Kelsey Lu did in her stellar 2019 cover. In an interview with Enfnts Terribles in 2019, Lu described the songs message and its built in ambiguity this way: ” It’s this feeling of obsession with love, but also discrediting it.” Lu’s version is a masterful piece of pop song origami, delicately unfolding in unexpected ways to beauteous effect. Featuring endlessly echoing vocal ad-libs, more space than “Space Oddity,” and the song’s signature heartbeat at the front and center of the mix, it is positively transcendent.

Song Sung are Georgina and Una McGeough, twin sisters from Monaghan, Ireland, and their 2016 version of “I’m Not In Love” was done in collaboration with cinematic composer extraordinaire David Holmes. The track has a distinct late night in the city Chromatics vibe, all breathy vocalizing and woozy beats and is the aural equivalent of neon lights reflecting on a rain streaked cab window at 2am. Yup, all the poetic over the top visual descriptions apply here, for it is just that transportive and gorgeous.

Alt-rock band Lazlo Bane have kicked out not one but two cover-themed releases over their 25-year career. The first of those was a 20-song love letter to ’70s AM radio classics called, yup, Guilty Pleasures. Amongst the tracks included was “I’m Not In Love,” a song no one should ever feel guilty about loving. The band cleverly incorporates a Beach Boys “In My Room”/”Warmth Of The Sun” flavor into their arrangement, giving it a heretofore unseen but undeniably welcome sunset over the Pacific vibe. And megabonus points for the sweetly subtle drums/acoustic guitar in the song’s second half and the supremely handsome and inventive vocal ad-libbing in the coda.

Rick Springfield’s “I’m Not In Love” appeared on his 2005 album The Day After Yesterday, a compellingly oddball collection of covers that exposed him as a knowledgeable savvy straight-up pop nerd. In addition to 10cc, it features songs by The Church, The Blue Nile, and Gerry Rafferty, and it makes for a sweet and surprisingly poignant listen. As covers go, it’s pretty faithful, there’s no real coloring outside the lines, but here’s the thing: Rick’s vocal is delivered with such sincerity and raspy angst that it’s clear he really, really loves the song. To further clarify, this is not the same thing as your brother singing off-key at the top of his lungs to “Old Time Rock and Roll” as he washes his car. This is Rick Springfield, supremely underrated power-pop lifer, taking his fandom to another level and doing it very, very well.

Meg Birch has been responsible for some pretty exquisite covers over the past five years, including a couple that we’ve featured here (and here). Her 2016 version of “I’m Not In Love” is positively skeletal compared to all the others we’ve mentioned, just piano, bass and Birch’s virtuosic voice. Her showy vibrato flourishes lend her cover a distinctly modern day pop flavor, yet the overall mood is half empty; this is a total torch song…and an old school, heartbreaking slow burn of a performance.