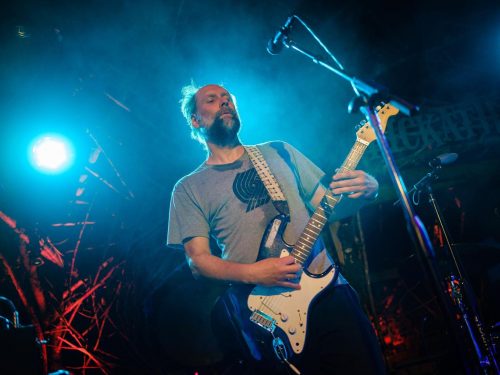 Indie rock legends Built to Spill are not the first band that come to mind when you think of the very distinctive sound of David Bowie’s “Ashes to Ashes.” Known for Doug Martsch’s distinct high-pitched voice and his winding guitar solos, they’re not a band usually associated with songs that made the dance charts. But Martsch has covered the song with his side project Boise Cover Band. The song was recorded back in 2003, but just being released now.

It should come as no surprise that their version of “Ashes to Ashes” is quite different from the original. It’s a slow, almost psychedelic-country version of the song. The distinctive opening melody, originally played on guitar synthesizers, is here replaced by what sounds like a pedal steel guitar, or a guitar with a pedal effect that is backmasked. (It could be guitarist Ned Evett’s fret-less glass guitar.) The relaxed vibe lets Martsch handle the vocal, which might be a tougher call if they played at the same speed and energy of the original. He’s backed by acoustic guitar, bass, drums, a keyboard and some backing vocals which hint at Bowie’s in the original. It’s extremely distinct and a far cry from the original (for one thing, it’s not the least bit funky).