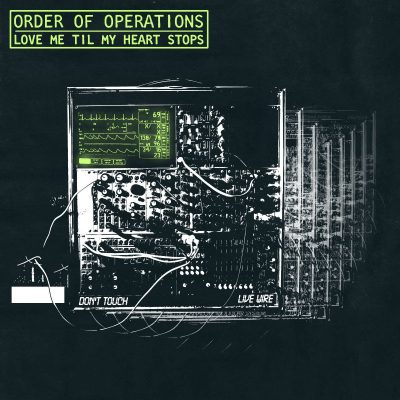 Love Me Til My Heart Stops is Order of Operations’s reimagination of Talking Heads in the backdrop of 2020. In it, four Talking Heads tracks have been transitioned from rock ballads into electronic synth-pop tunes. Order of Operations is Brooklyn-based artist Alain Paradis’s solo project.  Paradis claims to have wanted to make Love Me Til My Heart Stops as “another pulse to place alongside your own—-and that will never stop making sense.”

The EP opens with its lead single, a cover of “Psycho Killer.” Sharp electronic synths transform the song, although the synth doesn’t quite capture the same essence of the original’s guitar solos or the idiosyncrasy of live drums. This leaves the door open to showcase Paradis’s vocals, which are brought forward against the instrumentals. Attention to detail in the production is obvious, with the subtle use of reverb and panning to create a fuller sound with a repetitive beat. The underlying beat may feel repetitive, but overall, the effect is a bright translation of the song into an electronic dance anthem.

“And She Was” is slowed down, but it doesn’t feel slow. It has a compelling beat that retains the same groove of the original, but turns the tone from funky to chillwave through expert weaving of synths. Paradis leisurely croons the lyrics, which turn the story of the song into a reflective look on life. It is reminiscing fondly on a memory with a twinge of wistfulness. Paradis turns the song into a waltz instead of a polka. “And She Was” is certainly the most unique cover of the set.

O of O pick the pace back up with “This Must Be the Place (Naïve Melody).” The cover is reminiscent of an ’80s pop song and is the most similar sounding cover to the original, which also incorporates a fair share of synths. Paradis creates a smoother sound between the interacting synths, giving the song a smoother and bigger feeling. Creating an electronic cover of an already electronic sounding song is a challenge, but Paradis managed to alter the tonality of the instrumentals of the cover to make the cover recognizable as an Order of Operations cover and not merely a Talking Heads copycat. There is a back and forth between the emphasis of the vocals and the synth throughout the verses and the chorus. The rise and fall of the energy and tonality of the song make it sound like going on an adventure.

The EP’s finale is “City of Dreams,” a powerful ballad about the opportunity to make new history and memories every day. This cover has the most obvious drum line to liven it. The piano melodies are supplemented by sharp synths that brighten up the song. Paradis’s voice could be a copy of the original melody. But the synths fill in the higher note registers in contrast to his deep vocals to create a bit of a groove, without giving up any of the original epic-ness of the song. It’s a good, hopeful note for Paradis to go out on, as he prepares to pave the rest of his musical journey and create some new history of his own.

Click here for the best Talking Heads covers ever.