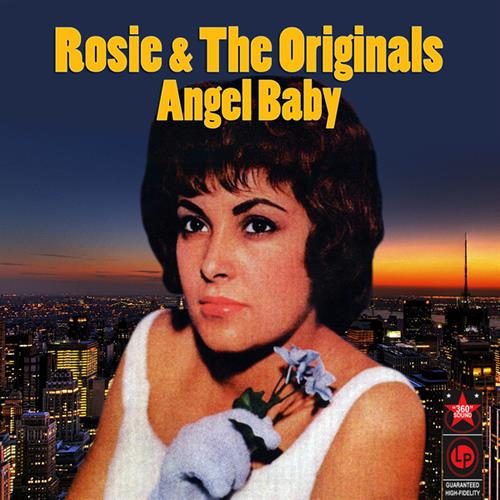 At least 13 other artists have attempted to reinterpret “Angel Baby” since it entered the US Billboard Hot 100 on December 12, 1960. David Lynch also, no doubt, took notice, as did the creators of creepy 2018 Netflix drama Dirty John, who exploited the track for an unsettling montage (in series 1: episode 3) of Eric Bana as a seductive confidence trickster. Certainly the way the sweet innocence of the song is embedded in a badly recorded and slightly off-kilter sound helps account for both its eeriness and its otherworldliness. But how did the song come by such an atmosphere, and what was its initial appeal?

Singer and pianist Rosie Hamlin certainly knew of no hit-making formula when she originated the song as a 14-year-old Latina high school student in San Diego in 1958. She was inspired by the Penguins’ 1955 doo-wop hit “Earth Angel” to address a seemingly divine loved one in verse, but her lyrics weren’t just lyrics. As she said herself, they were a genuine expression of teenage devotion; a love poem to her “very first boyfriend.” She contrived very little, therefore, when she penned: “It’s just like heaven, being here with you / You’re like an angel, too good to be true.” And she was just as naive going into the pivotal recording session for the song in 1959, when she was 15.

By this time, Hamlin was hooked up with four other equally inexperienced teenage musicians, all friends, who called themselves the Originals and rehearsed in her parents’ garage. They played at high school dances and house parties before grabbing the opportunity to make a tape of “Angel Baby” on a two-track machine in an abandoned airline hangar in San Marcos, California. They ran through the four-chord song about 30 times to get a clean take, but even so, the piano playing on the final version is distinctly wobbly at the 1.54 mark, and the overall sound around Hamlin’s angelic vocal is crude and amateurish. Also, the saxophonist failed to show up, forcing the bassist to play a spectacularly basic sax solo. And to top it all, the group forgot to prepare a flip side, having to come up with something (“Give Me Love”) on the spot with the help of a non-Original, Blueford Wade, on vocals.

In the end, though, it was precisely because of the real feeling, unrefined musicianship, and loose production on “Angel Baby” that it became a teen phenomenon. The group, without a record deal, failed to get San Diego DJs to play it, but instead persuaded the manager of a local department store to pipe it into listening booths, at which point it took off. The young shoppers showed their enthusiasm, prompting a scout from Highland Records to sign them up, there and then. Once the Californian label put it out, record stores couldn’t keep it on their shelves, particularly in Orange and Ventura Counties, where it was lapped up by the Mexican-American community who viewed Hamlin as one of their own. Nationally, too, it was a huge success, making it to #5 in the Hot 100 in January 1961, where it kept close company with Elvis’s “Are You Lonesome Tonight?”, the Miracles’ “Shop Around,” and the Shirelles’ “Will You Love Me Tomorrow.”

“Angel Baby,” in fact, had the same mass appeal amongst teenagers that girl-group records were beginning to have, now that Elvis and other former rock ‘n’ rollers like Johnny Burnette had seemingly grown up. It rode the wave not only of the Shirelles, but also the Bobbettes (“Mr. Lee”) and the Chantels (“Look In My Eyes”). And the appeal was the pure, youthful innocence of Hamlin’s voice, projecting genuine teenage emotion. It was the heartfelt and simple way in which she sang, and it was the artless exuberance of the playing, which outweighed any regard for sophistication, while recalling rock ‘n’ roll in its original, mid-’50s state. Plus there were the romantic lyrics that centered on the idea of the perfect boy, all of which female teens could relate to, and all teens could slow dance to.

Several US acts tagged as girl groups did go on to cover “Angel Baby,” the first of which was Kathy Young and the Innocents in 1961. The lead vocalist, also 15, sang just as earnestly as Hamlin, and talked through one verse to give the track that confiding quality so typical of the genre. But it wasn’t just female teens drawn to cover it. Many artists over 20, sometimes male, recorded the song, the most successful of whom tapped into at least one aspect of its greatness while applying a little magic of their own. Out of all of them:

Reparata and the Delrons did it well.

John Lennon did it best.

Reparata and the Delrons — Angel Baby (Rosie and the Originals cover)

Reparata and the Delrons made a bona fide girl-group record out of “Angel Baby” in 1970. They were a classic, all-female three-piece from New York who specialized in teen songs and harmony singing. They missed out on the early ’60s girl-group glory days that Phil Spector dominated, having only a minor hit in the US in ’65 with “Whenever a Teenager Cries,” and a bigger hit in the UK in ’68 with “Captain of Your Ship.” But they made a solid covers album in 1970 with the nostalgic Rock ‘n’ Roll Revolution, featuring their Rosie reinterpretation.

With Reparata now taking a backseat role in the group, it’s Delrons member Nanette Licari who provides the stunning lead vocal on “Angel Baby.” She’s faithful to the original, radiating all the necessary innocence, but she has a far more competent backing band, with confident bass playing and tight percussion, a consistent rhythm, and a way more dynamic sax solo. It’s smoother (not better) than Rosie’s version, and it builds like all well-produced pop records build, but what’s intriguing is the elevation of the song to the status of girl-group standard in the context of the album. On Rock ‘n’ Roll Revolution, “Angel Baby” takes its place alongside the Bobbettes’ “Mr Lee,” the Ronettes’ “Be My Baby,” the Shirelles’ “I Met Him On A Sunday,” and the Chiffons’ “He’s So Fine.”

San Francisco alt-rock trio Black Rebel Motorcycle Club did a fine job of amplifying the unearthly aspect of “Angel Baby” when they covered it in 2013, as an iTunes bonus track for their Specter At The Feast album. They achieved something similar to The Jesus and Mary Chain on their seminal “Just Like Honey” single of 1985, which was to bring an unlikely ’60s “girl group” element to their own dark and brooding sound. Knowing that Rosie’s song was ripe for such treatment, singer Peter Hayes applied some breathy vocals and some brooding synth sounds, before Robert Levon Been eventually came in with a layer of mournful guitar fuzz and echo. They might well have been auditioning for a part in Twin Peaks: The Return.

John Lennon’s vocal commitment to “Angel Baby” on his 1975 version makes for easily the best cover of the song, as the glorious 2020 Gimme Some Truth remix emphasizes. The singer likely first heard the track in January ’61, when it was released as a single in the UK, in edited form, by London Records. It wasn’t long before he put Rosie’s song on a pedestal with numbers like “Some Other Guy” and “Be-Bop-a-Lula,” which he belted out in the clubs of the St. Pauli district, and which profoundly influenced his future development as a songwriter. It had that emotional honesty he valued. That absence of artifice. That purity of expression.

Lennon affirmed to Rolling Stone in November ’68 that “Angel Baby” was one of his favorite songs, ahead of recording it in late ’73 during the troubled LA sessions for the covers album he was legally committed to make (long story), Rock ‘n’ Roll. It was an unhappy time for him, during the infamous “Lost Weekend” of debauchery and separation from Yoko, but he clearly found joy in performing a song so central to his idea of what music should be. He found something of true worth, therefore, amidst the alcohol-fueled chaos of working with co-producer Phil Spector and his army of eminent Wall of Sound musicians. His enthusiasm is palpable when he delivers his spoken-word intro: “This here is one of my all-time favorite songs. Send my love to Rosie, wherever she may be.”

Lennon proceeded to comply with Spector’s obvious desire to give Rosie’s tune the epic “Be My Baby” treatment he was celebrated for, complete with soaring brass arrangement and thunderous drums. The singer gave it one of his most powerful vocal performances, with a falsetto that had never been put to such use, albeit smothered in echo for that period feel. It sounds, without doubt, as if he’s finding renewed inspiration — salvation, even — in performing a song that so impressed him in his youth, before things got complicated.

So it’s one of life’s great mysteries that the cover only made it onto Morris Levy’s bootleg of the Rock ‘n’ Roll sessions in January ’75 (that long story again) and not the official release of February ’75. Rosie Hamlin still knew about it, though, and said it was “the highest compliment I could imagine.” This was before it was released officially on the posthumous Menlove Avenue compilation of 1986, again on the 1990 Lennon boxset, and again (remixed) on a reissue of Rock ‘n’ Roll in 2004. Subsequently, in 2020, Sean Lennon oversaw an essential remix of the track for the Gimme Some Truth compilation. This version, though sadly lacking the spoken intro, really lets the voice take center stage, with no echo and less volume on the horns. The vocal is clean and crystal clear. It’s pure Lennon.