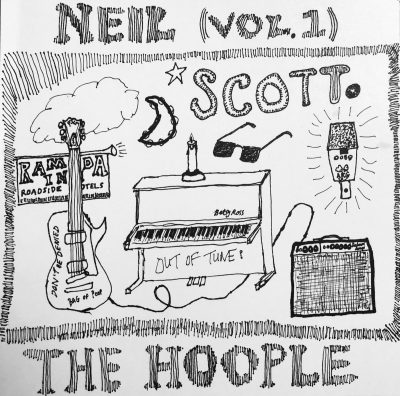 Famed alternative rock sideman Scott McCaughey is perhaps best known for his contributions to R.E.M. and The Minus 5, his band with R.E.M. guitarist Peter Buck. In November 2017, McCaughey had a serious stroke that, in his words, left him without “my ability to talk, sing, make music.” He used Beatles and Neil Young songs to help recover his music-making skills. Now he’s released some of the Neil Young recordings, under the nom de rock Scott the Hoople.

McCaughey’s take on the sedate “Music Arcade” from Broken Arrow, one of my favorite Neil Young songs from the 1990s, is way more upbeat, with a resonating piano and prominent drum beat. It’s perhaps a more appropriate setting for Young’s lyrics.

Another personal favorite, “For the Turnstiles,” also gets a bouncy piano and drum arrangement, this time with some spiky guitar playing from McCready. McCaughey removes the second vocal and turns a very sparse arrangement into a slightly less sparse arrangement. I’m not sure it works.

The take on Buffalo Springfield’s “Nowadays Clancy Can’t Even Sing” is appropriately psychedelic. McCaughey’s voice gets a haze, accompanied by what sounds like a Farfisa organ, and McCaughey plays his rhythm guitar part through what sounds like a Leslie speaker, as was the thing in the late ’60s. (There might be some backmasking, too. It doesn’t get more ’60s than that.) What was a folk song is now a psychedelic song. It’s an interesting approach.

Appropriately enough, the next track is Neil Young’s ’90s wish for a Springfield reunion, “Buffalo Springfield Again.” McCaughey does a bit of a garage rock thing to what was a soft folk-country reminiscence. It’s an entirely different approach. It’s worth checking out for McCready’s fantastic solo.

“Sad Movies” is such a deep cut that this Neil Young megafan had never heard it before. An outtake from the mid-70s – possibly intended for Zuma – it got more attention when it was included in the set list for Neil Young Trunk Show. McCaughey’s version is far more elaborate, with plenty of instruments, but it maintains the downcast vibe of the original.

A deep cut from Sleeps With Angels, “Trans Am” is yet another very personal choice from McCaughey. He slows the song down a bit but otherwise mostly honors the arrangement, with similar backing vocals and with a vibe that could easily be mistaken for Neil Young himself (minus the voice).

We know we’re in the presence of a major Neil Young fan when he’s covering songs off Life, the mostly live Crazy Horse album from Young’s lost decade of the 1980s. McCaughey’s more faithful to “Mideast Vacation” than he is to basically any other original in this collection. The instruments are a little different, of course, and this version is McCaughey in the studio instead of Young and Crazy Horse live. But if McCaughey can’t be Young, he shows just how close he can get.

McCaughey’s take on the classic “Thrasher” features an opening melody line played by what sound like synthesizer pretending (and failing) to be a harmonica. He’s upped the tempo substantially and added more and more sounds as the song progresses, including drums, piano, and backing vocals. It’s a lot of window dressing for one of Young’s greatest songs.

Re*ac*tor was the beginning of Young’s synclavier phase and is certainly not widely regarded. But “Shots” was singled out by some at the time as being better than the rest of it. McCaughey pairs the song with instrumentation that might have been found on After the Gold Rush, along with an appropriately gritty McCready lead guitar part. Result: a song that sounds true to Neil Young the performer, even though it sounds nothing like Young’s own version. It’s pretty cool.

“Almost Always” is a really recent Neil Young song, a collaboration with country rock band Promise of the Real. McCaughey takes it to an alternate version of the ‘6os, like he does with a lot of these songs – there’s a prominent double beat, an ever-so-slightly distorted vocal, and a load of instruments. It’s a long way from country rock.

As is his wont for most of this record, McCaughey does the opposite of what you’d expect for the cover of the grungy “Ramada Inn,” from the Crazy Horse record Psychedelic Pill. In his hands, it’s a vaguely psychedelic folk rock song.

Zuma highlight “Barstool Blues” is slowed right now, with elaborate drum fills and plodding piano. The bizarre arrangement gives new weight to one of my favorite Young lyrics: “And I saw you in my nightmares/But I’ll see you in my dreams/And I might live a thousand years/Before I know what that means.” Partway through, Mike McCready shows up with a solo which feels like it’s from another song, a lot like those drums.

A hopeful song from Fork in the Road, with a pretty typical country vibe, “Light a Candle” is given a more meditative interpretation, both with McCaughey’s vocal and the nearly bluesy lead guitar from McCready. As with most of these covers, McCaughey manages to rethink the arrangement pretty drastically.

NEIL (Vol. 1) is clearly a personal record, filled with idiosyncratic takes on Neil Young songs that most casual fans have never heard. McCaughey’s fairly radical rearrangements work more often than not, and they provide a new lens through which the Neil Young superfan can hear these songs anew.

NEIL (Vol. 1) is available on Bandcamp’s Scott the Hoople page.